Opinion: Confronting the age of immediacy 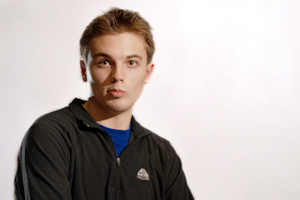 Hank Venetta is a senior English major and columnist for the Daily Kent Stater. Contact her at [email protected]

The Pew Internet & American Life Project recently reported that the average teenager sends nearly 60 texts a day. Christ Almighty, that’s out of control! I’ve been saying the world’s gone to straight to hell for decades with all these hippies and socialist robots running amok, and now kids are glued to their phones sending each other nude pictures, wrecking cars and making bad spelling errors? What’s next for the country I fought for? Microwaves? Color TVs?

Before you kids quit reading, this won’t be one of those preachy “When I was your age … ” ramblings. Now, let me find my teeth and tell you a story.

When I was in fifth grade, AOL Instant Messenger, also known as AIM, became tremendously popular among folks in my school. That’s where you instant message each other with screen names, kiddies. (Ok, fine, I’ll drop the old geezer narrative.)

So, I’m around 11 years old. At this time, in the early 2000s, dial-up Internet was the norm. Ah yes, the difficulty of getting online — all the static, screeching and dialing will never leave my memory. Pages loaded really slowly, so you had to be sure what you were clicking on was worth it.

Despite this, I thought the Internet was damn cool. There I was, a middle school student who could IM his friends to arrange plans or send funny pictures. After 9/11, my friend sent me a picture of the Statue of Liberty lifting her middle finger toward the sea. A caption read: “We’re Coming, Mother Fuckers!” As a child, these images were a big part of my education on world events. It subconsciously influenced my perspective on the Middle East — not in a good way. George W. Bush must have loved Internet memes.

The current pace of advancement in technology is unlike anything ever in the history of civilization, and it is astounding to be alive at this time. The more I read and learn, the more I anticipate how wild my lifetime is going to be with its unbelievable inventions and spectacles, and how certain changes — oblivious to a child — dramatically influenced my way of thinking. Indeed, freshmen and seniors in college have drastically different stories to tell. In an age of accelerating technological progress, years make big differences. I cannot stress this enough.

For the sake of making a point, let’s pretend my fellow students in this LER class, who right now are looking at People.com, Youtube, Facebook, playing solitaire and shoe shopping while a professor talks, are all freshmen. They have been familiar with social media since the first grade. Many faintly recall dial-up, and some created a Myspace account at age 13.

I don’t even want to know when they got their first cellphones. I got mine at 17. It’s crazy to see a child with a cellphone. Not crazy in a bad way; rather, fascinating, since a cell phone’s impact on a child is more significant than someone older.

So what’s all this rapid change mean for us? Well, I see the darker side of technology everywhere; namely, how it appeals to the laziest aspect of human beings. It is instantaneous, endless and amusing. Some of us are good at resisting the impulse to indulge in useless information; others fall prey to it like junkies.

I fear the lack of content in popular websites, which either contain images or short lines of text. We remain on the same page for shorter and shorter amounts of time. This is due to speedy connection, but also because numerous shiny buttons are on our screens. Companies want you to click, and you do. Ad revenue is generated by our clicks to new pages.

Let’s face it: Great reading material exists online; we just aren’t making enough effort to find it. Also, books still exist! “Fahrenheit 451” hasn’t happened yet! Many of us read low quality content and discard it, as opposed to absorbing and reflecting on the good stuff.

Meanwhile, the world is a mess. When you consider the increasing transparency of world events due to technology, it’s becoming inexcusable to remain unengaged to them.

Generation Y is blessed with great gadgets. But we need to do a better job adapting to them and fathoming their potential. Think about the Egyptian revolution, and less about Neal Patrick Harris’ fancy meals shown on Twitter. Stand up for something, and annoy people about it through social media.