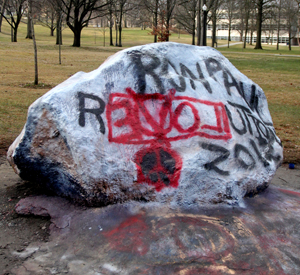 Painting the rock on Front Campus has been a long-standing tradition and a unique outlet for student expression for about 80 years.

Greek organizations started the tradition of painting the rock in the 1930s. Since then, the rock has become a message board for anyone who has something to say — from advertising important issues and causes, gloating triumphs over rivals or commemorating the dearly departed.

The legendary mass we call “the rock” originally sat on a grassy strip in between the road and sidewalk on Main Street. When the street was widened in 1972, the rock found its new, safer resting place at the bottom of Hilltop Drive on campus.

Dag Roshaven, 1997 Kent State alumnus and Sigma Nu brother, told the Daily Kent Stater in 2009 that his fraternity would paint the rock every time another fraternity marked their symbol on it.

“We would smear Vaseline on there to prevent another fraternity or sorority’s paint from sticking to the rock after us,” Roshaven said.

The tale often told on campus is that the rock is thicker than originally started because of the thousands of layers of paint.

A Neil Armstrong quote says it best, “Geologists have a saying:  Rocks remember.”

How much does the rock remember? Curtis Eulberg, a 1998 Kent State graduate and member of Delta Chi, decided to investigate himself.

“In 2007, I grabbed a hammer-drill to find out for sure,” he told the Stater in 2009. Eulberg discovered that the paint was only almost three-fourths of an inch thick. “The layers of paint on the rock are a symbol of the folk history at Kent State, I will admit having six inches of paint or more on the rock certainly makes a better folktale,” he said.

The Gainesville Sun reported that Juan Fernandez, a University of Florida graduate student in civil and coastal engineering used laser scanning technology to measure the depth of one layer of paint. He concluded that a single layer of paint is between three-thousandths and eight-thousandths of an inch thick.

Even without the fact that the paint continues to peel and weather away, Fernandez found it would take about 200 coats of paint to thicken the rock by one inch.

President Lester Lefton has told the Stater he would like to paint the rock but hasn’t had the chance to.

“Just like the painted rock has a history of all those before us that painted its surface, rocks on Earth are important to us,” Harrison said. “(It’s) a history of the Earth, with a record of changing landforms and the evolution of life.”

Megan Spellman, a junior nutrition and dietics major and member of Delta Gamma, said today the rock is a symbol of camaraderie and unity.

“The rock is something fun that chapters can do together,” Spellman said. “Going later at night to paint the rock is fun and a great bonding experience.”