The story of Kent State Memes 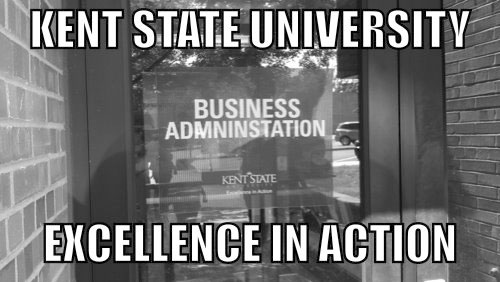 The explosion of Kent State Memes, a Facebook page created about a month ago, is impossible to ignore. The page, whose description is “a place to playfully mock the land of the free, home of The Hub,” has quickly reached nearly 3,000 likes.

“I was looking at other universities, and I saw they all had meme pages,” said Christina Suttles, junior news major. “I decided to make one, but I never thought it would be such a big deal.”

It all started with a meme with Socially Awkward Penguin, and the page rapidly started gathering likes.

“It’s a great way for students to express their first amendment rights,” Suttles said. “The page is harmless and is a way to laugh about the university.”

On the page, students can post memes, which are ideas spread through the Internet usually in images. However, memes can come in a variety of formats. Memes are essentially part of the Internet’s pop culture.

“I use the page to share the funniest ones that people post,” Suttles said. “I think the best one was the photo of the sign that had administration spelled wrong.”

That meme, created by Jacob Green, sophomore public health major, with the help of Justin Lagore, junior public relations major, displays a sign with the words “Business Admninstation.” Green added “Kent State University” to the top of the graphic with “Excellence In Action” underneath. The meme has about 480 likes.

“I was at my freshman orientation, and I saw the sign,” Green said. “It was just hilarious that someone couldn’t spell administration correctly.”

Green said he collaborated with Lagore to create the meme after the Facebook page launched. There are hundreds of other memes that students have created since.

“One does not simply finish homework, without checking Kent State Memes,” said Adam Nowicki, sophomore paralegal studies major, in reference to the popular “Lord of the Rings” meme, that features a screen-capture of the character Boromir.

However, there are some students on the page who complain this use of a meme is incorrect.

“It’s annoying actually,” said Brandon Stephens, freshman criminology and justice studies and political science major. “Memes have a simple concept, and it’s not like people don’t know how to make or use them properly. There are hundreds of thousands of examples out there.”

“I don’t really mind,” Suttles said. “At least, not as much as other people. It’s not a big deal.”

Recently Suttles has used the page to start discussions about a number of issues, including the recent billboard advertisements by Kent State and the “Kony 2012” viral video campaign.