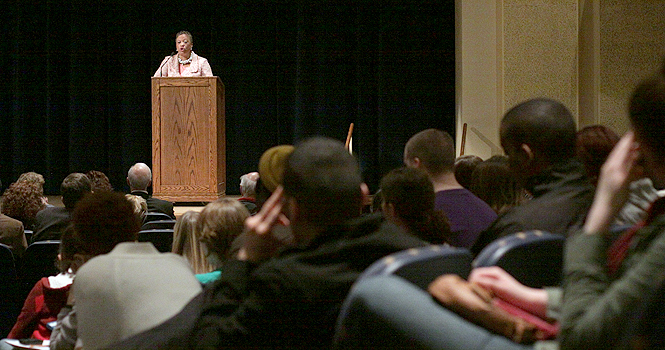 Debra Simmons, editor of the Plain Dealer, speaks at the KIVA on March 26 as the guest lecturer for Stand for Diversity. Simmons is the 2012 recipient of the Robert G. McGruder Distinguished Guest Lecture Award. Photo by Brian Smith.

The editor of The Plain Dealer spoke to a capacity audience in the Kiva Monday morning, as she was presented with the McGruder Award from the School of Journalism and Mass Communication.

Debra Adams Simmons was honored with the award for her accomplishments and encouragement of diversity in the field of journalism. Since 2003, the School of Journalism and Mass Communication has partnered with the Kent State Division of Diversity, Equity and Inclusion to award someone in the journalism field who exhibits diversity, whether it be race, gender or sexual orientation.

“I am honored, humbled and almost speechless to be the recipient of this year’s McGruder and diversity award,” Simmons said after receiving her award.

Simmons was named editor of The Plain Dealer in 2010. She had served as the managing editor since 2007. Simmons earned her bachelor’s degree from Syracuse University and attended Northwestern University’s graduate school for media management. She has worked as the vice president and editor of the Akron Beacon Journal, served as a juror for the Pulitzer Prize several times and has won several different awards, including the ATHENA Award, which recognizes women in leadership roles.

“She clearly meets the qualifications for the award,” Leach said. “She has always been devoted to diversity in the workplace. The award is also about diversity and leadership. She really is a good news leader for today and tomorrow, meaning for right now and for the future.“

The lecture and award are in remembrance of Robert G. McGruder, who was an influential figure for diversity in journalism. He was the first black editor of the Daily Kent Stater, and the first black reporter at The Plain Dealer. Eugene Shelton, an assistant professor in the School of Journalism and Mass Communication and the McGruder Lecture coordinator, has directed the event since it was created in 2003.

Shelton said age, race and gender, among other aspects, are all considered when picking the award recipient. He said the award winner from the previous year is asked to refer someone to be honored the following year. The nomination from the prior recipient is then reviewed by the lecture’s committee before deciding the winner.

“We have Debra Adams Simmons, who is an ideal recipient,” Shelton said. “She is an African-American woman who has risen to the very top of her field as the top editor of two of Ohio’s major newspapers. To be in a male dominant field and succeed the way she has is phenomenal.”

The McGruder Lecture began with an address by Stanley Wearden, dean of the College of Communication and Information, Alfreda Brown, the vice president for Diversity, Equity and Inclusion and Sue Zake, an advisor to the Daily Kent Stater, before the keynote address. Simmons spoke about the legacy of Robert McGruder and why diversity still matters. Simmons thanked past and present colleagues and The Plain Dealer publisher Terry Egger for attending the lecture. Following Simmons’ address was an invitation-only luncheon.

Simmons said she is committed to a diverse newsroom and staff, as well as committed to producing diverse content in The Plain Dealer in every paper her and her staff produce. Simmons said she tries not to dwell on the obstacles she has faced as a black woman in the journalism field. She said has stuck closely with the values of McGruder himself, who believed in diversity and representing minorities.

“I’ve tended not to focus on being an outsider or overcoming obstacles, but really bringing in the collective knowledge I’ve gained over the life of my career to help guide me in whatever role I am in at the time,” Simmons said. “I have received some varying recognitions during the course of my career, but I would say none of them have been as meaningful to me as this is.”