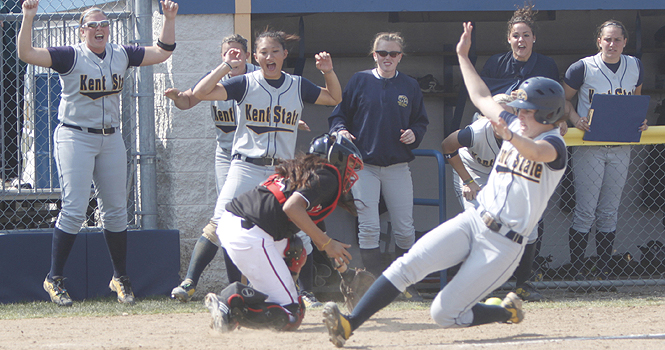 File photo. The Flashes greet junior shortstop Mary Holt at the plate after she scored the winning run off of a base-clearing double by junior 3rd baseman Jessica Blanton on Sunday, April 10. The Flashes had a five-run seventh inning and defeated Northern Illinois 8-7. Photo by Jessica Yanesh.

The Flashes begin their weekend matchups against Central Michigan at noon Friday. The Chippewas are 13-11 and are coming off 14-4 and 11-1 victories over Detroit last week.

The Flashes will wrap their weekend with Eastern Michigan Saturday at 2 p.m. and Sunday at 1 p.m.

This is a crucial part of the season for the Flashes, who hope their 13-15 record improves against MAC opponents.