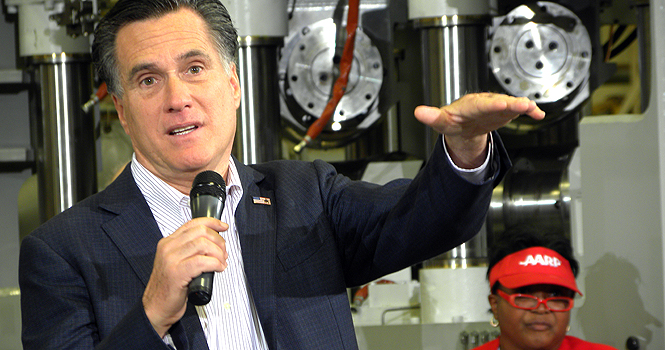 Mitt Romney addresses the crowd in Youngstown Monday afternoon. He highlighted agenda points such as reforming government healthcare and shrinking the size of government. Photo by Britni Williams.

Mitt Romney and wife Ann had one goal in their speech in Youngstown at Salt Springs Industrial Park Monday afternoon: beat Barack Obama.

“I’m angry,” Ann said. “I’m angry because I have 16 grandchildren, and I do not want them inheriting our excesses.”

Romney followed his wife’s lead, saying “My message to Mahoning Valley is pretty straightforward — I want to bring good jobs back here … I want to see us confident that the future is brighter than the past.”

Throughout Romney’s speech about bringing back “economic prosperity” and plans to get Obama out of office, the price or quality of education didn’t come up.

During a question-and-answer session, a high school senior stood up and asked Romney what his plan was to make college more affordable.

“I’m going to college next year, and it’s not very cheap,” he said. “I was curious, if elected, what you would do with regards to college tuition?”

“The best thing I can do for you is to tell you to shop around and to compare tuition in different places.” Romney said. “Make sure you’re getting the education you want for the cost you want. Make sure you get your degree in four years or less; work hard.”

Romney admitted that college is a huge expense and students don’t want a lot of debt as soon as they graduate, but he held firm to his idea that students are on their own for education.

“I know that it would be popular for me to stand up and say I’m going to give you government money to pay for your college,” Romney said. “But I’m not going to promise that. What I’m going to tell you is shop around; get a good price.”

The exception to this was for those students who serve in the military.

Romney warned students to be wary of the debts they take on during college.

“Find a great institution of higher learning, find one that has the right price, shop around,” Romney said. “In America — this idea of competition — it works. And don’t just go to the one that has the highest price; go to one that has a little lower price where you can get a good education. And hopefully you’ll find that. And don’t take on too much debt, and don’t expect the government to forgive the debt that you take on — recognize that you have to pay it back.”