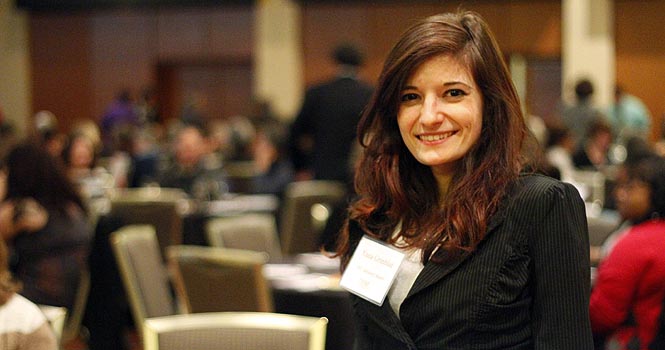 Women from across Kent State’s campus who nurture, lead and inspire were honored Tuesday at the third annual Mothers, Mentors and Muses scholarship fundraiser hosted by the Women’s Center.

Photos and quotes from each woman’s nomination statement floated across the screen in the Kent Student Center Ballroom as Do Re Me, an all-female jazz band, played. An exhibit at the back of the ballroom featured photos from female photojournalism majors.

Amanda Kenney, Women’s Center program coordinator, said the goal of the event was to understand and appreciate what the women have done for the university.

“This night is really about honoring all the accomplishments of the women that we have on campus and how honored we are to have them and work with them every day,” Kenney said.

The ballroom filled with applause and laughter as each woman stood to receive her certificate from Women’s Center director Heather Adams.

“I was extremely honored because I nominate women for this every single year, so I know the type of caliber of women that they are,” Drummer said. “To be amongst those ranks of people meant a lot to me.”

The event also served as a fundraiser for the Women’s Center Endowed Scholarship Fund, which provides Kent State female students with $500 scholarships.

Senior architecture major Yana Grinblat, who received the scholarship last year, attended the event. She said she was glad they could honor women who deserve the award.

“I think it’s really nice that they’re putting on an event for everybody,” Grinblat said. “It’s not just for the girls who are getting the scholarship but the focus is on these mothers, mentors and muses.”

The scholarship goes to female students who show leadership, good academics, financial need and an interest in women’s issues. Nineteen women have received the scholarship.

Amy Quillin, associate director of Student Accessibility Services and Women’s Center advisory board member, was the keynote speaker of the night. Quillin, who was an honoree last year, stressed that the honorees make significant differences on campus every day.

“It is our great privilege to recognize the heroism of those who have offered the gifts of time, talent and energy to make those differences in the lives of Kent State students, faculty and staff,” Quillin said.

A list of all honorees can be found here.