Spin-More Records closes after 30 years, Jimmy Johns to move in 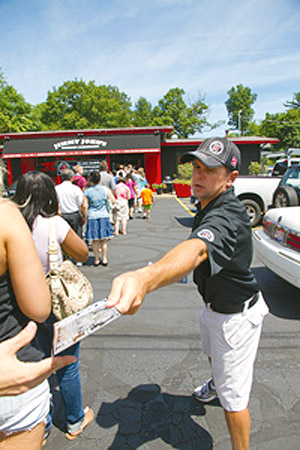 A line forms out the door during Jimmy John's $1 sandwich day on July 14, 2011. File photo by Thomas Song

The Kent Stage said goodbye to Spin-More Records last week after 30 years of business to make way for the new home of Jimmy John’s Gourmet Sandwiches.

Kent Stage owner Tom Simpson said that he had been discussing the possibility of moving Jimmy John’s into the Spin-More site with Economic Development Director Dan Smith since January.

“They needed some place to go and they were looking at different spaces that might work, and they just thought it might be a nice fit,” said Simpson.

Spin-More moved out completely last week and Simpson said he expects that Jimmy John’s will start demolition and construction as soon as possible. He estimates that the new location will open in June.

“It was not a fun thing to have Spin-More leave,” Simpson said. “As Phil said, he understands it’s not personal, it’s just business.”

The owner of Spin-More Records, Phil Peachock, said that he has been operating for the past two years without a lease. So when his good friend and manager of the property Tom Simpson contacted him about giving up the storefront so that he could lease it to a major chain, he said he understood.

“I understand the situation of what is happening downtown and the demand for business property,” he wrote in an email. “Along with all the major changes comes higher rental fees and quite frankly I am not in the position to pay more rent than I was paying.”

Downtown has never been a great place mainly because of the parking, he wrote, and he believes that the situation may only get worse with the downtown development, but he held onto the space because of the affordable rent.

“More or less, ma and pop stores are being pushed out to make room for the corporate shops,” he wrote.

Spin-More is still operating online and Peachock said he and his wife may open another storefront in Kent.

“For those who supported us through the years, I wish to thank them and just maybe I will reopen in another storefront in the future,” Peachock wrote. “It was a good run and experience because I met a lot of great friends that made my life more interesting.”

Simpson has thought about having a restaurant connected to the Kent Stage for a few years, but has never found the right fit.

“We’ve been approached by three other restaurants in the past,” he said.

What made Jimmy John’s a good fit was the size of the space needed and that they didn’t need ventilation hoods for any of the food prepared.

Jimmy John’s had to find a new location because its current location was purchased by the city for the new Kent branch of the Portage County Municipal Court, which officials plan to break ground on in the coming months.

The sub shop will receive $15,000 from the city, approved by council, to help with moving costs. The restaurant must be completely moved out of its East Main Street location by June 1.