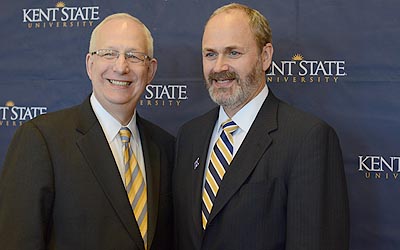 Dr. Todd Diacon was named the new provost and senior vice president for academic affairs at KSU on Feb. 13. President Lester Lefton introduced Diacon who gave a speech and answered questions in the student center. Photo by Nancy Urchak.

Todd Diacon woke up this morning and turned on his hotel room TV. He happened to see something that he said affirmed his decision to come to Kent State as its new provost.

“Up pops this Kent State ad with one of the founders of Devo, and I just thought that was the coolest thing in the world,” because he is a fan of the band, he said. “It confirmed the wisdom of my accepting this offer.”

President Lester Lefton introduced Diacon at a press conference Monday morning, saying he was “an experienced and dedicated administrator … someone who excels in communication [and] who [is] appreciative of a wide variety of points of view.”

Diacon said he was afraid that as he was researching Kent State he would read something about the university he didn’t like, but that never happened.

“Every department, every college, every program that I examined, and every press release or informational item I could find about the university piqued my curiosity that much more … and made my decision a very easy one,” Diacon said.

So, what’s a provost?

-Chief academic officer of the university

-Assists in administration of university policies and strategic goals

-Serves on Faculty Senate as an “ex officio” member — this means he isn’t elected, but he is there just because he is a high-ranking official

Diacon will replace departing Provost Robert Frank, who is leaving Kent State to accept the presidency at the University of New Mexico.

Diacon said he is impressed by the variety of programs at Kent State.

“I think it is spectacularly great that we’re a university that’s excellent in liquid crystals and fashion design,” Diacon said. “To me, that’s the yin and yang of a great university is that we do many things well.”

Diacon said he will fit in well at Kent State.

“I understand higher education in general quite well, [and] I have a lot of experience at large state universities,” he said. “So that won’t be a transition for me.”

Diacon said he wants students to know he is data-driven and experienced in higher education.

“[Students] can expect someone that looks a lot at what other universities are doing … and someone who knows that we’re here to educate the students,” he said. “That’s job number one. That’s important to me.”

A Kent State press release said Diacon is originally from Kansas and received his undergraduate degree in history from Southwestern College. He has a doctorate of history from the University of Wisconsin-Madison, and has served as a history professor, concentrating on Brazilian history, at Amherst and Knoxville as well.

What former and future colleagues say

Dan Mahony, dean of the College of Education, Health and Human Services and head of the provost search committee, said Diacon was clearly an excellent choice.

Mahony said he spoke to faculty at his previous universities and heard lots of good things from them.

“I think that was actually the interesting thing — we struggled to come up with weaknesses,” Mahony said. “He really had done such a nice job in the interview and had such strong support across all the constituent groups he met with.”

“I don’t know if he’s actually been actively involved in negotiations at any point, but he’s certainly experienced a unionized campus before [at Amherst],” Mahony said. “ … We weren’t sure whether we’d find people who have had that experience and it just happened that our top candidate had that experience, which was just a bonus.”

Thomas Janson, a professor of music, a member of the search committee and a senator-at-large in Kent State faculty senate, said he was very impressed with Diacon, and he said other schools must have been too because Kent State was not the only school Diacon applied to.

“We were in heavy competition for him … I am so pleased that President Lefton jumped at the chance to make the offer, and even more pleased that Dr. Diacon agreed,” he said.

Janson called Diacon “one of the most intelligent people I’ve met in the last few years,” and said Diacon’s respectful attitude he saw in interviews could bring a new perspective to Kent State.

“Attitudes here may change,” Janson said. “A lot of the infighting may decrease. I think it’ll be a coordinating experience for us — bring us together with common ground.”

Daniel Fitzgibbons, associate director of news and media relations at Amherst, said Diacon was rather quiet in his time there.

“He came here relatively quietly during the summer,” he said. “There was no announcement of his appointment at the time … he’s not known to most students. But a fair number of faculty know who he is and work with him. I think there are people in the community who know him because he deals with the town and university.”

Fitzgibbons said Diacon was appointed to deputy chancellor because he knew their current chancellor, Robert Holub, from their time together at Tennessee.

Holub said in a press release Kent State is lucky to have Diacon.

“He listens carefully to all points of view and makes decisions based on what is best for the institution,” he said. “Your university has acquired someone who is a great colleague and an outstanding human being.”

Kim Harrison, an administrative assistant for the department of history at the University of Tennessee, Knoxville, said she had worked with Diacon a lot in her 18 years at Tennessee.

“I love Todd,” Harrison said. “He was wonderful — very good, fair and straightforward … Students came in here saying they loved him.”

What the effect is on students

“It’s a very crucial position to education — the second-highest-ranking administrator on campus, and he has a direct charge to Kent State’s mission,” Papp said. “Everyone on campus is important, but we’re here to receive degrees, so since the provost directs our education, you can’t undervalue that job.”

Students on campus generally said they do not know much about what the provost does or why this affects them.

Tanya Wenneman, senior air traffic control major, said she wants more of an explanation of the impact of this decision from the university.

“I want to know if this is going to affect me or the university as a whole,” he said. “Anything involving me as a student here, I want to know about it, especially if it’s going to benefit me.”

Brittany Brown, freshman architecture major, said she is not concerned about Diacon’s appointment.

“It’s probably something I should be concerned about, but I’m not worried about it,” she said. “I guess, overall, the provost would have some effect [on me], but I don’t immediately hear about it or see an effect.”

Diacon said he would want to increase student engagement and interest in the provost’s office by talking to freshmen at orientation, and by having regular lunches with students in the university cafeteria. He said students don’t usually know the inner workings of a school.

“It’s not intuitive to people who aren’t affiliated with a university,” he said.

Diacon reiterated something he said in his campus interviews: He will work to learn anything he doesn’t already know about the university.

“I don’t have all the answers, but I certainly will work hard to learn those answers and do my part to make an outstanding university even better,” Diacon said.

Update: Todd Diacon is joining the Kent State community as its provost a few months earlier than expected, the university announced Monday.

“Diacon is able to begin his duties at Kent State before the academic year closes, which will enable Dr. Frank, president-elect of the University of New Mexico, to begin transition activities there,” she wrote.

Frank recently accepted the presidency at his alma mater, and he will begin work there in Fall 2012.