Kent State, USG working to find a way for quarantined students to vote 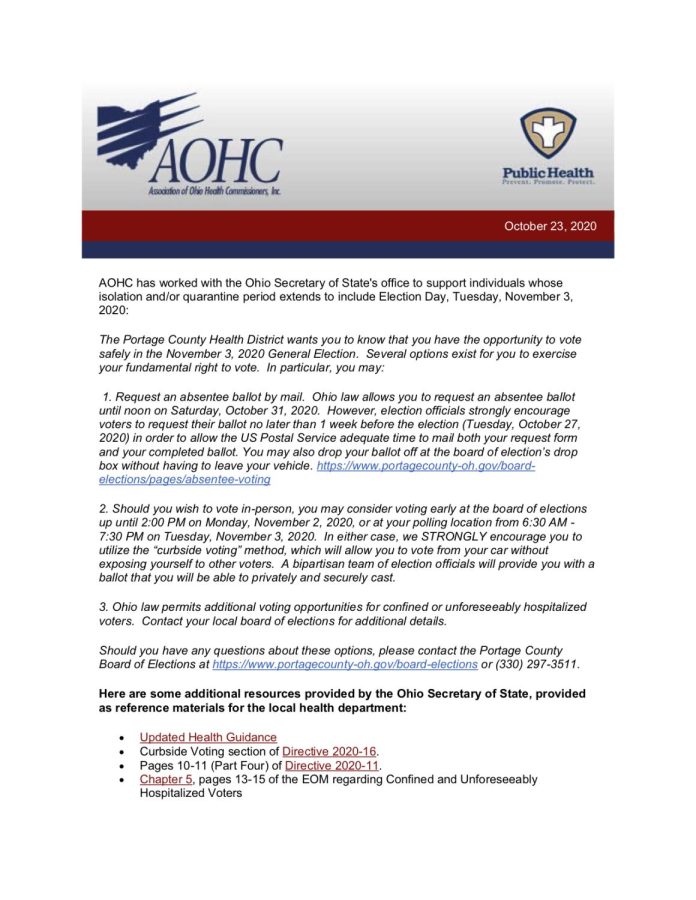 Guidelines put forth by the Association of Ohio Health Commissioners (AOHC) to vote while in quarantine.

Students in quarantine face the possibility of not having their vote counted this election.

Last Friday, Undergraduate Student Government (USG) started to discuss whether or not quarantined students could vote since they are obligated to remain in quarantine for a duration of two weeks.

“We had previously been working on some issues with students in isolation and quarantine so I think that was just on people’s minds,” Moore said. “I don’t know who exactly posed the question but I do know that was kind of what everyone was asking on Friday and we realized we didn’t have an answer.”

What worried USG the most was the unpredictability of who would fall victim to the virus in the coming week and the lack of a definitive plan to help those students.

Following their meeting last week, USG brought this to the attention of the university.

Moore and USG Director of Governmental Affairs Ethan Lower met with Dean of Students, Taléa Drummer-Ferrell on Tuesday over Microsoft Teams to discuss the issue. Moore said the university has been encouraging students to refer to the guidelines put forth by the Association of Ohio Health Commissioners (AOHC). Furthermore, any additional questions should be sent to Moore or Lower.

“There is not really a direct or clear plan to handle this because it is difficult with all these different policies and stuff involved and also each student’s individual circumstance,” Moore said. “Did they have an absentee ballot they wanted to get sent in? So, how are we going to have them get that to the post office? Were they planning on voting in person?”

The redirection of concerns and questions to USG has placed extra burdens and stress on student government, said Moore, who also stated this issue is not exclusive to Kent State as universities throughout the state are dealing with it too.

On Wednesday, Manfred van Dulmen said this was a situation the university was running into and that Drummer-Ferrell was in the midst of working on a plan.

“We’ve looked at guidance from the Ohio Department of Health, as well as we’ve had conversations with the city commissioner of elections to look at different options that are available for students,” van Dulmen said. “I know that it’s really important that we figure out what is possible given the various limitations that are in place.”

One of the guidelines included in the AOHC recommendations is the possibility for additional voting opportunities for those confined or hospitalized under Ohio law.

Contained within Directive 2019-28, is a section for absentee voting under special circumstances. For those with a disability or in confinement, they can return by mail or apply for a receipt and return by two Board of Elections employees. This rule states two employees belonging each to different parties may deliver an absentee ballot and return the ballot to the board office. The same rule applies for those hospitalized which also includes the option for family members of those hospitalized to deliver and return a ballot to the Board of Elections office on their behalf.

Disability and Confinement and Unforeseen Hospitalization both require applications to be filled out before such permission can be granted.

“For people who are confined, we still need to have the proper application delivered to our office,” said Deputy Director of the Portage County Board of Elections, Terrie Nielsen. “The confined statute only applies until noon on Saturday, so it will be of limited use.”

Drummer-Ferrell told Lower and Moore that curbside voting seems to be the top option for quarantined students, said Moore, who argued students may not have a car or readily available transportation options. And it still does not change the fact quarantined students will have to leave their dorm.

Moore said USG will be working hard to review the policies and procedures in place to the best of their ability.

“How do we advise them to make the best decision for public safety as well as enable them to get their vote out,” Moore said. “So that they don’t have some type of repercussion for leaving or put others at risk for leaving their dorm.”