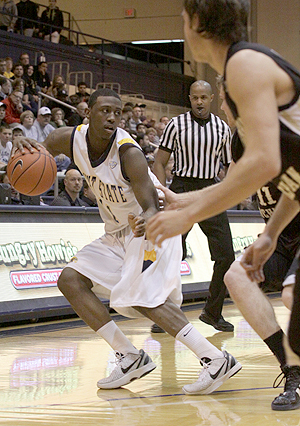 Kent State Guard Carlton Guyton makes his way through the Western Michigan defense during the Feb. 4 game at the MAC center. Photo by Brian Smith.

Kent State needed an overtime period to defeat Mid-American Conference West division foe Western Michigan Saturday night at home. The Flashes are hoping that another overtime will not be necessary Wednesday, as Kent State travels to Ypsilanti, Mich., to face Eastern Michigan.

“We shouldn’t go into overtime against any team from the West,” Kent State forward Patrick Jackson said.

The Flashes, who are on a four-game winning streak, have won 28 straight games against MAC West opponents since Feb. 2, 2008. Eastern Michigan (10-13, 5-4 MAC) leads the weaker West division by one game but is in the midst of a two game losing streak. The Eagles fell to Miami, 62-57 in overtime Wednesday and then were routed by Akron 77-47 Saturday.

Rob Murphy, Eastern Michigan’s first-year head coach, will receive a visit from a school with which he is quite familiar. Murphy was an assistant on former head coach Jim Christian’s staff at Kent State from 2002-04.

Eagles’ senior Darrell Lampley, who averages 13.3 points per game, leads Eastern Michigan offensively. The 5-foot-10 guard has scored 45 points in his last three games, but has made only 5-of-16 3-pointers in that span.

Junior forward Jamell Harris leads the Eagles with six rebounds per game and will be a focus of Kent State’s game plan. The Flashes find the most success offensively when they score on fast break opportunities, which Eastern Michigan will try to limit by playing zone defense.

“They play a lot of zone,” Flashes’ senior forward Justin Greene said. “We’ve got (to) be ready to move the ball and get the ball in the middle and try and work from there and hopefully be successful.”

Greene, who is averaging 13.1 points per game, is the main offensive option in the low post for Kent State. The Flashes will try to play offense from the inside out by passing the ball inside with the hopes that their outside scorers will find open shots without the ball.

Junior forward Chris Evans, known for his dunking ability that complements his outside shooting skill, is averaging 16.8 points per game during the Flashes’ win streak. Evans made important free throws late in Kent State’s victory over Western Michigan.

“Randal has been stepping up all year long, and Chris has been outstanding,” Greene said. “That’s what we need those guys to do. As long as they keep playing well, and Justin Manns keeps doing what he has to do, I think we’ll be fine.”

Manns grabbed 10 rebounds and scored five points in the Flashes’ win over Western Michigan, which encouraged his teammates.

“We expect that out of (Manns) every game, and we were happy to see it,” Greene said.

The play of Flashes’ defense has them listed as one of only 10 teams nationwide to average more than nine steals and force over 17 turnovers a game.

“Getting turnovers starts our running game, and we’re really good in the transition game,” Greene said. “Any time we can get a steal or turnover, we’re off to the races. That’s how we want to play.”

Kent State is 36-30 all-time versus Eastern Michigan and has won 15 straight over the Eagles. The Flashes will look to go undefeated on the road versus the West in 2011-12 tonight against Eastern Michigan.

“Getting a win on the road is really important for us,” Jackson said. “It’s a much-needed game, and we’ll come out and play like that.”

Tipoff between Kent State and Eastern Michigan is set for 7 p.m.