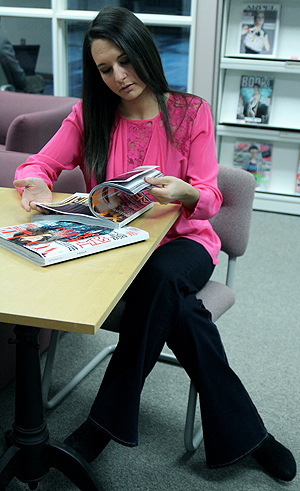 Senior fashion student Kate Ruque flips through magazines in the Rockwell library. Kate was one of 4 fashion students across the country to win the $30,000 Geoffrey Beene scholarship from the YMA scholarships foundation. Photo by Adrianne Bastas.

Editor’s note: This story is part four of four in our “future famous” series, where we profile students who we think will have an impact in the years to come.

From the ballroom of New York’s Waldorf Astoria hotel, Kate Ruque, senior fashion merchandising student, stood with seven students from across the nation. Some were from fashion schools, others with business backgrounds from Harvard, but they all waited for the same moment.

In front of about 2,000 audience members, including some of the fashion industry’s leading executives, a CNN correspondent was about to reveal the recipients of the $30,000 Geoffrey Beene National Scholarship.

“I remember saying to my mom when I was a freshman, because the [Kent State] fashion school is so big and so competitive, that by the time I was graduating I wanted to stand out,” Ruque said. “So I knew that I wanted to work really hard and take whatever opportunities came my way.”

And that work paid off when her name was among the four called to receive the Geoffrey Beene scholarship from the YMA Fashion Scholarship Fund in January. This scholarship is thought to be the largest any Kent State fashion student has ever received.

“I was very thrilled that there was a winner (from Ohio), and of course emotionally from the sense of being from Ohio, I was really very, very pleased,” said Kenneth Wyse, chairman to the YMA Fashion Scholarship Fund, president of licensing and public relations for Phillips-Van Heusen and a Cleveland native. “I think these students are the future of our industry, and I want to make certain that we offer a beckoningly bright future within this industry both as a career and as a statement of what fashion is about.”

When she was little, Ruque wanted to be a singer, but that did not pan out.

“I have a terrible voice, so that obviously didn’t work,” Ruque said. “I was a dancer growing up, so I wanted to be a ballerina, too, but you get a little older and realize that’s not really a realistic career option. So, after that, it was pretty much fashion.”

Since coming to Kent State, Ruque has continued to stand out to her professors.

“She is just so polished,” said associate professor Nancy Stanforth, who also helped mentor Ruque through the scholarship application process. “She was probably the best in the bunch I had when she was in my sophomore class. If we could find thousands of Kates, the industry would be so much better.”

In the summer after her junior year, Ruque worked through two internships: a buying position with Bergdorf Goodman and a merchandising position at Tommy Hilfiger.

“I kind of have a split personality,” Ruque said. “Part of me is very business-minded and analytical and the other part of me is artistic and creative, so fashion allows me to utilize both aspects of my personality.”

These aspects came into even greater play when she was presented with the national scholarship opportunities.

The contest then consisted of a case study, for which Ruque had to choose a failing retail company and revamp its business and financial models. Fashion Scholarship Fund judges trimmed the 35 applicants form across the nation to eight, who traveled to New York City to present their cases before a board of executive directors for the YMA Fashion Scholarship Fund. The next evening, the four winners were announced.

“I don’t even think you could quantify the impact or change (winning the Geoffrey Beene scholarship) is going to have on someone like Kate,” said Harry Harrison, executive director to the YMA Fashion Scholarship Fund. “The doors that it’s going to open, the internship or job offers that are going to come or become available that otherwise may not have due to the exposure Kate otherwise may not have received.”

The scholarship recipients also are given networking opportunities with fashion professionals which, Harrison said, “will streamline communication and ideally enable [the winners] to find employment upon graduation. In that room the night of the event are as many as 1,000 of some of the most influential leaders within the fashion industry, so they immediately are going to want to meet these individuals and hand them their business cards.”

Ruque is finishing her undergraduate degree and has started taking master classes for the fashion MBA program partnered with the business school. When it came time to look into jobs for after graduation in May, though, Ruque looked again for a national competition.

In its inaugural year, Fashion Draft NYC, a program from The New York City Economic Development Corporation, accepts applicants from across the nation who are then whittled down to about 40 who have phone interviews with fashion executives. From there, the executives choose who they would like to visit New York City for in-person interviews.

“Because of Fashion Draft, I have job interviews set up with Saks Fifth Avenue, Ralph Lauren, Gilt Group and Armani,” Ruque said. “I really want to move to New York, and I really want to start my career in the fashion industry as soon as possible to start working my way up in whatever company I’m in.”

Ruque’s interviews are scheduled for mid-February.

“She really is stellar at making connections, and that will serve her well in life,” Stanforth said. “I think she’s going straight to the top.”