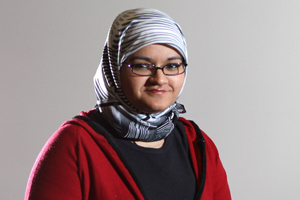 Fiza Shah is a columnist for the Daily Kent Stater. Contact her at [email protected]

“If it is an honor, and not an oppressive act, then I am sure that your family would be completely fine if you decide to dress in jeans with no hijab, right? Wrong… The fact is that you would most likely be ostracized by your family, unless your family is incredibly liberal.”—Random KSU Student

I’m a progressive 21st century woman. But I’m also a woman who chose to wear the hijab. And what many don’t realize is that these two characteristics are not mutually exclusive.

Another reader left some constructive criticism on my previous article, commenting that simply using quotes from religious texts isn’t helpful.

So, to take a different approach, let me tell you my own story. Not for personal glorification, but in the hope that it will be a more helpful approach.

I started to wear the hijab after winter break of my sophomore year in high school, but it had been a struggle since the beginning of that summer.

The decision to wear the hijab was the result of self-analyzation after the death of two family friends, both of whom were very religious. I didn’t necessarily respect them just for their religious dedication, but because of their incomparable humanity. This inspired me.

After thinking about it for a few weeks, I asked my parents if I could wear the hijab. If they were to react the way most people would expect, they should’ve exclaimed, “what took you so long” and quickly ushered me to my room to don a black veil. Instead, they said one word: No.

They didn’t want me to be subjected to any sort of discrimination for this decision. I spent most of the summer trying to convince them. It took me through winter break to persuade them this was what I wanted.

My mother is another example. She works alongside men and women. My father has never forced her to wear the hijab. Recently, she herself felt the desire to wear it, and he supported it.

You argue that this could only be the case if my family were incredibly liberal. But to the contrary, I come from a very religious family. My father spent many years studying religious texts. My aunt is also very learned in Islam and used to preach professionally. My other relatives, while they don’t preach, are also very religious. Many of our family gatherings are consumed with religious-based discussion.

But, I wasn’t forced to put it on, and I won’t be forced to keep it on, though I will because I want to.

A heartfelt thanks to RandomKSUStudent and Arafat for the responses. Also, thanks to Zaphod for the constructive criticism, which I did try to apply.

If you have ANY comments or questions regarding Islam, please email me at [email protected] or leave a comment in the space below. I’m also interested to know if you feel this column is worth continuing or not.