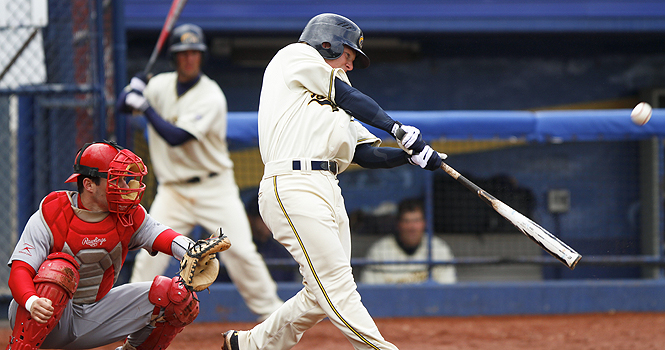 The Flashes entered into Nashville, Ten., with plenty of momentum after a successful weekend in Rock Hill, S.C., where the Flashes finished with a 2-1 record, splitting two games with No. 9 Georgia Tech. and ending the weekend defeating the Winthrop Eagles.

In this past weekend’s three games, Kent State had a stellar 35 total hits and the pitching staff collectively had a 1.33 earned run average.

This windy matchup had all the makings of a classic pitchers’ duel. Kent State senior David Starn proved to everyone in Nashville why he is a premiere pitcher in the Flashes’ rotation. Starn threw a six-hit, 10 strikeout game with only two earned runs. The Flashes lost this heart-breaker 2-1.

“David [Starn] is the guy that we go to,” coach Scott Stricklin said. “We have a chance to win every time when he’s on the mound.”

David Starn is currently in second place in his Kent State career in strikeouts with 239 strikeouts. Starn is only 35 more strikeouts short of record holder Dirk Hayhurst’s 274 strikeouts.

“It was a frustrating game for us,” Coach Stricklin said. “David Starn did everything possible to win.”

Kent State had at least one man on the base paths in every inning with a total of eight men left on base.

“Offensively, we had our opportunities, and we didn’t get it done,” Stricklin said. “We’re going to have to play much better offensively to be the kind of team we want to be.”

Right-handed sophomore Ryan Bores got the big win in Saturday’s game, throwing only five innings, giving up five hits and striking out three batters. But Bores wasn’t the biggest headline for the Flashes against the Lipscomb Bison.

The Flashes offensive production woke up from Friday’s slumber, defeating the error-prevalent Bison 16-3.

The offensive production was electric in this game, and coach Stricklin couldn’t be happier.

“Our guys came out very aggressive,” Stricklin said. “We swung the bats pretty well early, and we were really aggressive on the base paths. We put the pressure on them and they made some defensive errors.”

One Flash seemed to get the most out of his at-bats. Senior catcher David Lyon went 3-for-4 with a single, double, triple and knocked in four runs batted in. Lyon was a homerun short of hitting for the cycle. He is not only a tremendous ball player, but he also shows incredible leadership.

“Senior leadership is huge,” Stricklin said. “David (Lyon) has been back there catching for us for four years. Our guys feed off of him. The only way you’re going to win championships is when those upperclassmen step up.”

Kent State took Friday’s immaculate defensive game and Saturday’s offensive surge and put it all together for Sunday’s afternoon ballgame. The Flashes played a clean defensive game and had plenty of timely hits, defeating a scrappy Lipscomb team 4-0.

“Defensively, we were outstanding,” Stricklin said. “All the pitchers were impressive. We just have to clean some things up offensively. Those are the things we can fix throughout the season.”

“He [Skulina] was outstanding today,” Striklin said. “Last weekend he didn’t have his best stuff and still competed. He really dominated today from the first pitch on. It’s going to be fun to watch him grow. He’s a hard worker.”

Offensively, the Flashes did what needed to be done at the most important points of the ballgame. Kent State ended with a total of 11 hits with the runs coming in the seventh and the ninth innings. Junior Evan Campbell stepped up his role with an explosive day. Campbell went 4-for-5 with three singles, a double, and a RBI.

“Campbell is a spark plug,” Stricklin said. “He can run, he’s aggressive, he has some power, and he can lay down a bunt. We moved him up to the top of the order because he’s been swinging it pretty well. He’s a very versatile player.”

Flashes’ closer Casey Wilson slammed the door on the heart of the Bison order, striking one out. With the win, the Flashes improved to an overall 4-2 record.

“Western Kentucky is a very good team,” Stricklin said. “They are a challenge. They have great arms and they’re very athletic. We have to be ready to play.”