New V.P. of Research has big plans for Kent 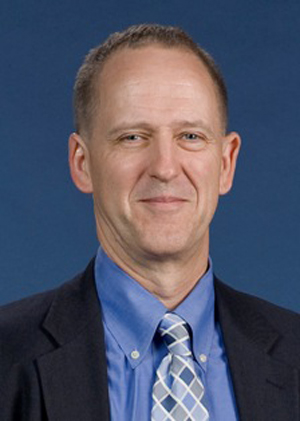 William Grant McGimpsey imagines Kent State as a single organism. Each department acts as part of the larger being, one whose relevance is tied to a purpose. He believes that purpose should be research with a positive impact on society.

McGimpsey is the new vice president of research for Kent State. He started here in August.

McGimpsey sees problems like an aging population as opportunities for the university to benefit mankind. He believes that various departments can all play a part according to their strengths.

McGimpsey envisions the College of Business studying the financial issues facing the elderly, the School of Architecture and Design creating furniture and spaces that are more conducive to an aging population, and the College of Health providing education about the prevention of common ailments such as cardiovascular disease and mental degeneration.

“There are all these strings that can be tied together,” McGimpsey said.

As a chemist, McGimpsey said he spent countless hours performing experiments with benefits that weren’t immediately obvious. When some of his research was used to help create medical sensors for Bayer, the feeling of accomplishment was a turning point in his life.

“It was a wake-up call away from esoteric, rote science,” McGimpsey said.

He previously worked at Worcester Polytechnic Institute in Massachusetts, where he earned a Trustees Award for Outstanding Research and Creative Scholarship.

Stanley Wearden, dean of the College of Communications and Information, was on the search committee that hired McGimpsey. He said he believes Mcgimpsey has what it takes to realize his vision for the school.

“He has an outstanding interpersonal communication style,” Wearden said. He also noted McGimpsey’s talent for synthesizing viewpoints from various sources in order to see a bigger picture.

According to Wearden, besides all of his professional qualities, the guy is likable.

“He is a warm, outgoing man who is easy to get along with,” Wearden said.

McGimpsey said he has spent the last five months assessing the strengths of the university, as well as talking to companies to find out what they need, research wise.

“Everyone is a puzzle piece. Once they fit together, the picture becomes clear,” Mcgimpsey said.