Wrestler reaches goals with father by his side 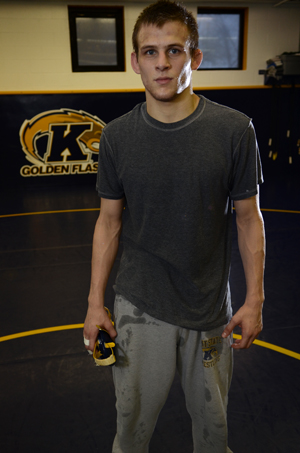 Many of the wrestlers on the Kent State wrestling team started at a very young age. By starting early, they developed a strong passion for the sport that got stronger as they grew older. Many of them came in with their goals set high and have done whatever it takes to achieve those goals.

It is that kind of fiery passion that fuels fifth-year senior Nic Bedelyon as he continues his successful career at Kent State.

“Wrestling has been in my family my whole life,” Bedelyon said. “It’s what I’ve wanted to do for as long as I can remember.”

This season, Bedelyon, a native of Lewistown, Pa., has a record of 26-2 and is ranked No. 4 in the nation in the 125-pound weight class, according to InterMat. He helped the Flashes clinch the Mid-American Conference regular season title this year and now has his eyes set on more.

“Winning is big for me,” Bedelyon said. “I set my goals high as a freshman, and one of them was becoming a national champion. That’s still one of my big goals, but you have to take it one day at a time and one week at a time.”

Bedelyon said that aside from winning, another big motivator for him is his father, Mike Bedelyon.

“My dad is my biggest inspiration,” Nic Bedelyon said. “He inspires me and always encourages me to get better. He’s like my best friend.”

If you happen to attend a Kent State wrestling meet in person, it is likely you will see and hear Mike Bedelyon in the stands, cheering and shouting out encouraging words to Nic Bedelyon during his matches. His commitment to wrestling and to the team is every bit as strong as his son’s.

“I’ve never missed a match,” Mike Bedelyon said. “I go wherever he goes. Even when the team went out to Vegas last year, I went with them.”

Mike Bedelyon said that his son Nic Bedelyon has been interested in wrestling ever since he was able to talk. He remembers the day when his son’s love for wrestling began.

“My cousin was a state champion in Pa.,” Mike Bedelyon said. “So we were watching his matches on DVD one day. Nic saw his hand getting raised, and he told me ‘I want to get my hand raised’. I told him ‘well then, you’ve got to wrestle.’”

Nic Bedelyon’s response, “What’s wrestling?” was the simple question that essentially started it all for him.

“The school’s wrestling coach told me that Nic could start wrestling at 4 years old,” Mike Bedelyon said, “So we started him out, and he’s never stopped since then.”

Nic Bedelyon continued competing through elementary school, middle school and so on. He compiled an impressive record of 123-14 while wrestling at Indian Valley High School. He finished in the top five in the Pennsylvania state wrestling championships in three of his four years, including a second-place finish in his senior season.

Mike Bedelyon said that he feels really good about how well Nic Bedelyon has done in wrestling over the course of his life. He also talked about how Kent State gave his son an opportunity when other schools passed over him.

“He didn’t get recruited by a lot of colleges,” Mike Bedelyon said. “They said he was too small. Kent gave him a chance, and he’s proven a lot of people wrong with what he’s done.”

Nic Bedelyon came to Kent State in 2007 and contributed immediately, winning his very first match as a freshman. He was named the MAC Freshman of the Year at the end of the 2007-08 season and became an All-American in his sophomore year.

He fell just short of being an All-American again in his junior season, but he was still able to win an individual MAC championship in his weight class that year. This year, he is well on his way to repeating as MAC champion and possibly earning All-American honors once again. As of Feb. 5, he had an overall collegiate record of 107-30.

Wrestling coach Jim Andrassy praised Nic Bedelyon for everything he has brought to the program over the past five years.

“Nic is one of the best kids I’ve ever coached,” Andrassy said. “He works hard, and he’s accomplished a lot here. I told him that I would let him live in my house if it meant getting him back as a coach next year. I would do anything for him.”

Nic Bedelyon is majoring in human movements with a minor in athletic coaching. He said that he plans to stay with the Flashes next year and become an assistant coach.

Mike Bedelyon said that he and Nic Bedelyon have developed a special bond and that he has a unique way of motivating his son.

“We mess with each other a lot,” Mike Bedelyon said with a laugh. “We’re more like buddies than father and son. Sometimes I’ll tell him ‘You suck,’ and he’ll come back and says ‘Hey, you suck.’ He always has a comeback to stuff I say, and that kind of stuff fuels his fire.”

That fire inside Nic Bedelyon is still burning as his senior season winds down. He is incredibly focused on accomplishing the remainder of his goals and the team’s goals

“We really wanted to win the MAC, and we did that,” Nic Bedelyon said. “Now it’s all about becoming a top-10 team, doing well at the MAC tournament, and then qualifying for the national tournament.”

Winning a national championship would be a storybook ending to his stellar college career. With the combination of outstanding ability and an unbreakable spirit, accomplishing that seems very possible. But no matter what happens from here on, win, lose or draw, he knows that his dad will be right there to cheer him on.