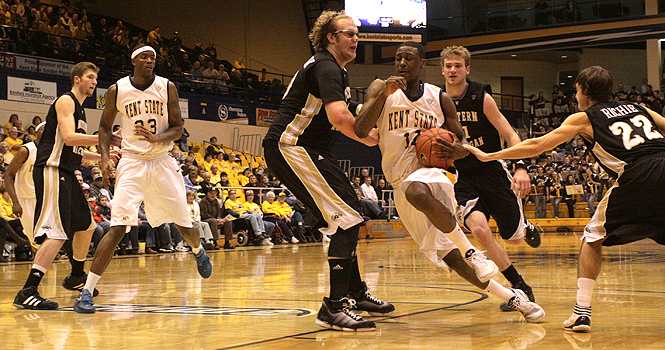 Kent State guard Carlton Guyton makes his way through the Western Michigan defense during the Feb. 4 game at the MAC center. The Flashes won the game 78-77 against the Broncos. Photo by Brian Smith.

With the game tied at 64-64, the Flashes’ defense needed one stop to force overtime. A group of Kent State defenders, led by senior forward Justin Greene, blocked a last-second shot attempt by Western Michigan’s Matt Stainbrook and the two teams reached the end of regulation.

The game-winning play came with eight seconds remaining in overtime. Kent State’s junior forward Chris Evans missed the second of two free throws and the ball headed toward the Flashes bench when senior guard Michael Porrini jumped and threw the ball off of Western Michigan’s Demetrius Ward. The ball then appeared to glance off of Porrini, who was out of bounds, but officials signaled possession in favor of Kent State.

“I saw that [Ward] was going to allow it to go out of bounds,” Porrini said. “I just wanted to save it. I knew if I could save it and throw it back into him, I knew it would go off of him.”

Following the game, Porrini couldn’t say whether or not the ball actually touched him while out of bounds.

“I made a hard play,” Porrini said with a smile. “Fortunately, it went our way.”

Porrini finished the night with eight rebounds, five points, five assists and four steals in Flashes’ 78-73 victory over Western Michigan. Kent State’s offense struggled and made 41.7 percent of its shots from the field, even though the Flashes scored when it mattered most.

Down 61-56 with 2:31 left in regulation, Greene, who led the Flashes with 19 points, drew a foul and made two free throws. Porrini drew an offensive foul in the backcourt seconds later, and junior guard Randal Holt made a 3-pointer to suddenly tie the game at 61-61.

“I feel like I’m not going to miss them all night, so I just step up and shoot them with confidence and watch it go in,” Holt said.

Holt made a second 3-pointer less than a minute later to put Kent State up 64-61, but Stainbrook made a layup, drew a foul, and made the following free throw to tie the game at 64-64. Greene’s block sent the game into overtime, where Evans led the Flashes’ offense with nine points.

Evans started the overtime period by taking a missed layup by Holt and slamming it through the hoop to give the Flashes a two-point lead and get the 3,762 in attendance on their feet.

“It was a great play by Mike (Porrini),” Evans said. “It started off with his block, then Randal caught it in transition, missed the layup, so I just trailed the play and put it back in. I just never gave up on the play.”

The dunk not only excited the fans in attendance, but gave Kent State the emotional lift they needed.

“[Evans] is a highlighter dunker, so when he dunks that always adds a spark to our team and we get the fans going, get our team going,” Holt said. “He does some amazing things in the air, so that just gets everybody fired up and ready to play.”

Holt blocked a shot and made a fast break layup to put Kent State ahead by eight, and it appeared as though the Flashes had done enough to secure a victory.

“I made a hard play,” Holt said with a laugh. “I did see Whitfield was going to shoot the jumper, he shot it kind of lazy, like he didn’t know I was standing right next to him. I just made a play for the ball and luckily I got my hands on it.”

Western Michigan refused to give in and cut Kent State’s lead to three points, but Porrini’s effort to keep the ball in possession of the Flashes secured the victory, as Evans made two free throws with two seconds left and Kent State walked away victorious.

“You never want to lose in front of your home fans,” Holt said. “We wanted to do whatever it took to get the win. That’s just what we did tonight.

We found a way to win, it wasn’t pretty, but we got it done once again. The championship still has to come through Kent State.”