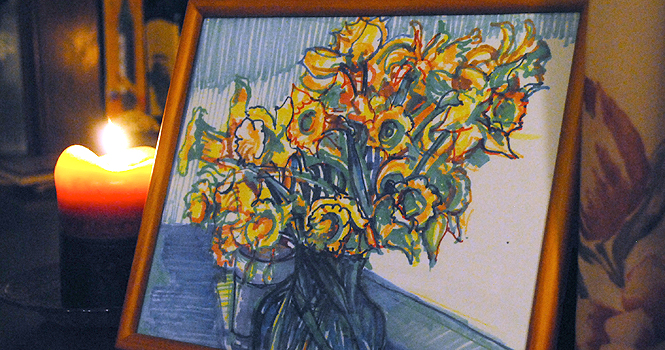 He could be found at Starbucks on almost any given day, with his white-gray beard and wild-looking hair, sketching anything that caught his fancy.

The 68-year-old, who had moved to Kent in the mid-60s, earned a bachelor’s degree in studio art as well as a master’s degree in painting.

He would sell his artwork at the Haymaker Farmers’ Market, Art in the Park and at coffee hour at his church.

While many students knew him as “F*** You Bob” for his flipping off motorists around Kent, friends close to Wood describe him as very intelligent but rough around the edges.

The Rev. Melissa Carvill-Ziemer, minister of the Unitarian Universalist Church of Kent where Wood was a regular attendee, said she first met Wood when she moved to Kent about seven years ago.

Her first impression of him was that he was “intellectually curious” and “intense.”

“He was someone who knew how he wanted to do things,” Carvill-Ziemer said.

She said Wood “was not typical,” but was “straightforward” and “interested in what other people had to say.”

F. John Kluth, owner of FJKluth Art Gallery in Kent, had been a friend of Wood since they met 15 years ago at Kinko’s.

“I was over there Xeroxing things and he was using the Xerox machines to make art,” Kluth said. “I was interested in having an artist who wanted to have an exhibit, so I talked to him about it.”

The art that he was making at the time is rare now, Kluth said. Older Xerox machines allowed for single-color copies allowing the artist more control with his or her prints.

When Kluth first opened his gallery, it was in the same building as Wood’s apartment, so he visited daily.

“The apartment was very limited,” Kluth said. “So he spent a lot of time in the gallery.”

When Kluth’s gallery moved to its new location on North Water Street, he said he didn’t see him quite as much, but Wood did come by the new location almost every other week.

“He was quite focused and intelligent in some areas,” Kluth said. “In other areas he had very little ability. In terms of social interaction, he wasn’t terribly skilled. A lot of people thought ill of him because of that behavior.”

Kluth said Wood had an undeniable eye for art.

“When we went to an art exhibit, he spent a lot of time studying each painting in the exhibit,” Kluth said. “When I had some reason to consider one artist or another, I could ask him about that artist, and he could remember which exhibit that artist’s work appeared in.”

Kluth said even though he didn’t have the best social skills, “most people would agree that he made a significant contribution to the culture of Kent.”

“Robert certainly portrayed a rough exterior both in his appearance and his behavior at times,” Anderson said. “But if you took the opportunity to get to know him, you’d discover that really he’s a very fascinating individual.”

Anderson said that while he wasn’t the type to initiate a conversation, he was happy to talk to people who took an interest in him. He was also well-read in art history and philosophy.

“He very much enjoyed a good intellectual debate,” Anderson said.

Anderson said she and Wood often talked about church sermons and books related to the topics of the sermons.

“If he and I had read the same book, he would like to have a conversation about that,” Anderson said. “In fact, I even mentioned a book I was reading, and he went out and got that book and read it so that we could have a conversation on that particular book.”

Wood also took interest in the lives of artists and the cultural impact of art, Anderson said.

“He had a very comprehensive view of the artistic world,” Anderson said. “It was always fun buying a piece of art from him and asking about the story behind the painting because it was more than what met the eye.”

An informal memorial, including a display of Wood’s artwork, is planned for Feb. 21 at the Haymaker Farmers’ Market.

Carvill-Ziemer said the church is also planning to have a memorial for Wood, but a date has not been set.

Wood’s work is currently on display at the FJKluth Art Gallery.