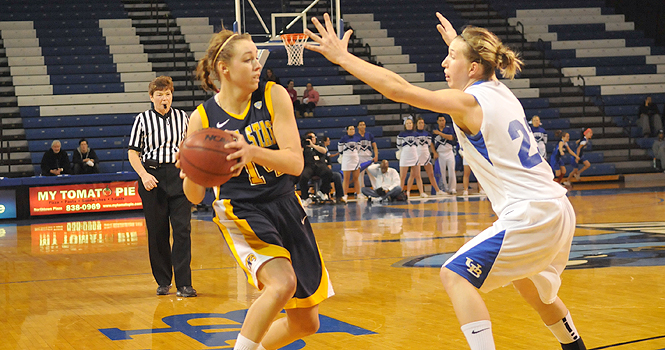 The Flashes fell to Buffalo 85-72 during the away game on Tuesday, Feb. 21. Photo by Alexa Strudler.

Despite having five players in double figures, the Flashes could not correct a six-game losing streak and saw it turn into a seven-game skid. Getting no points out of the bench, the team was led by junior forward Tamzin Barroilhet’s 20 points outburst.

“(The Bulls) really didn’t do anything to give us fits; it was our turnovers and lack of execution,” assistant head coach Lori Bodnar said. “In all fairness to these players out here on the floor, if you look at it, we had three players play 40 minutes tonight for us, and I think down the stretch basically what happened was, we ran out of gas.”

Kent State and Buffalo split the season series with the home team winning in each game. Junior Tamzin Barroilhet led the team with 20 points, her second best offensive output this season. Junior forward Diamon Beckford missed her third straight game after starting every game so far this season. Junior Leslie Schaefer scored 12 in her place.

“It’s very disappointing because (turnovers) are something that we went into the game saying ‘we’ve got to take care of the ball,’” Bodnar said. “I honestly think that it was. Looking at my stats, we had 14 turnovers with four minutes left in the game and ended up having seven turnovers in the last four minutes.”

Late in the first half, Schaefer ran into some foul trouble, and the team was forced to use five guards on the floor. The result was a 10-0 to finish the half and keep the Flashes in the game.

“I thought that overall, we played pretty well for the most part,” Bodnar said. “It’s disappointing that our last seven plays we turned it over. You have to buckle up and execute down the stretch. That’s where it has been hurting us. It hurt us at OU, also.”

Not being able to finish out games has plagued the Flashes for most of the season, but no occasion was more apparent than Tuesday night. With a combined 14 minutes out of his bench by freshmen guards Melanee Stubbs and Dena Droste, coach Bob Lindsay has seen little production out of his role players.

The loss is the Flashes 12th of the season on the road where consistency continues to be the problem. With a high probability of a road Mid-American Conference Tournament game looming, the team will need to get over the problems that come with playing away from the M.A.C. Center.

The team did find some good improvement in shooting percentage, sinking 29-54 shots (54 percent) to improve from Saturday’s 37 percent at Ohio.

The Flashes have a three-day break before hosting rival Akron on Saturday at 2 p.m.