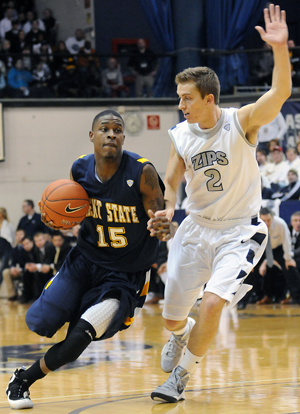 Kent State entered last week with one goal on its mind: win both road games and take control of the Mid-American Conference East division.

One week and two losses later, the Flashes reside in the middle of the MAC East standings, trailing division-leader Akron by two games. What’s worse is that the team appears to have encountered a struggle that it has seldom dealt with in the past three years. Kent State has reversed its season-long trend of starting games slowly and has instead taken substantial leads into halftime during its past two games.

The Flashes are averaging 39.2 points and are shooting over 53 percent in the first half of MAC games. However, the second half has presented problems for Kent State. In their past two games, the Flashes lost double-digit leads in the second half due to scoring runs by their opponents and have responded with stagnant offensive performances. These responses led to a blowout loss at Ohio and a nine-point loss at Akron.

Following the loss to Akron, Flashes’ senior forward Justin Greene questioned the heart of his team with the hope that the following week would produce positive results. The team returned to the practice court Monday and worked on improving team defense, among other fundamentals, and left the M.A.C. Center floor with the feeling that it was their best practice of the season.

“It was as intense of a practice that we’ll have all year,” Greene said. “We got back to that dog mentality and that work hard mentality that Kent State is used to seeing around here. If we keep playing the way we are practicing, I think we’ll be fine.”

Kent State will begin an important week of conference play versus the MAC West tonight at home against Northern Illinois before leaving for two road games. The Flashes will visit Toledo Saturday and Central Michigan Tuesday.

Before the team can begin thinking about their weekend road trip, they must first focus on protecting their home court and finding their winning form versus Northern Illinois.

Fortunately for the Flashes, Northern Illinois is in the midst of a nightmarish season with a 2-15 overall record. However, the Huskies have recorded a conference win, a 74-66 victory over Central Michigan Jan. 14 and have been in contention late during conference losses.

“Even though their record isn’t very good, they’re a great rebounding team and in the league they’re in, they’ve been very competitive,” Kent State head coach Rob Senderoff said.

Northern Illinois freshman Abdel Nader has had no trouble adjusting to MAC basketball and leads Northern Illinois with 14 points per game. Senderoff is well aware of Nader and the rest of the Huskies’ ability to give Kent State a challenge.

“They’re a young team,” Senderoff said. “They start two or three freshmen, and they have one freshman in particular who is playing very, very well, Abdel Nader. He’s averaging 14 (points) a game and can really shoot the ball.”

Huskies forward Tim Toler, one of only three seniors on the roster, averages 10 points per game and is one of Northern Illinois’ best shooters, making 50 percent of his shots from behind the arc in 2011-12. Kent State will need to implement defensive improvements in order to record its third MAC win and first against the MAC West.

“We just have to try to create turnovers and do a good job defensively in the half court,” Senderoff said. “We have to play for 40 minutes the way we are supposed to play.”

The Flashes have taken their past two losses and used them as motivation for what they hope will be future success, which was evident in the tone and performance of players during practice.

“You can tell that everybody is focused,” Greene said. “Everybody is upset about the two losses, and we’re ready to go.”

Kent State and Northern Illinois will tip off at 7 p.m. at the M.A.C. Center.

“(Tonight’s) game is really, really important to us to get back to our winning ways and to play the way we are capable of playing,” Senderoff said.