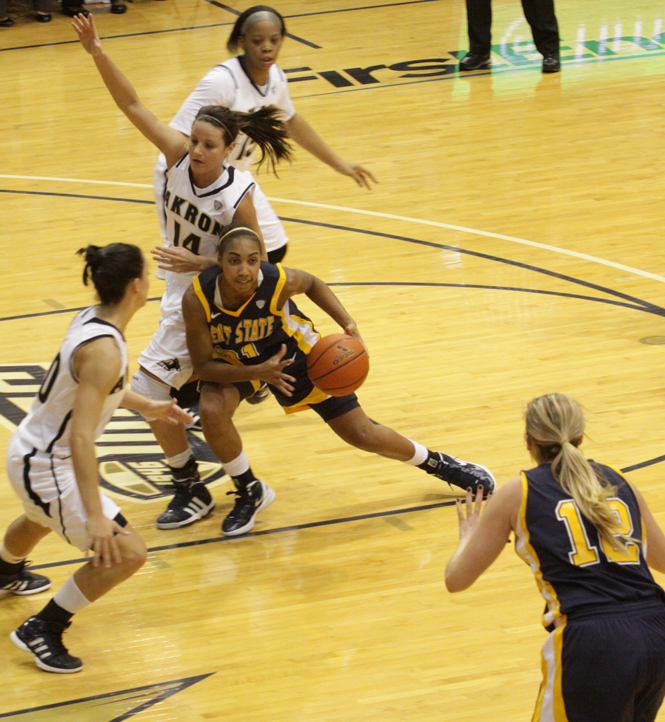 Though it was not enough for the win, the Kent State women’s basketball team contended against conference rival Akron due to an overall improvement in shooting percentage.

It wasn’t the ideal game for the Flashes, but Saturday’s loss to Akron showed more positives than negatives for the young team.

When it came down to it, the Flashes lost the game where they have so many times this year: at the end of the game with a slim lead. Up 59-58 with just under three minutes left in the game, the Flashes went on to make only one more basket, turn the ball over once and miss a total of four shots. This led to a 68-62 loss to Akron and a missed opportunity to gain a point in the PNC Wagon Wheel Challenge.

“I tell everybody that I think we’ve improved as a team, we are really young and we’re still not in a position where we finish our games well,” head coach Bob Lindsay said. “Maybe with an older team we’d finish today maybe a little better, but with all that being said, you have to give credit to the Akron team. They made the plays at the end of the game that made the difference.”

Coming out of the gate, the Flashes looked ready for the rivalry matchup by jumping out to a 13-4 lead at the seven-minute mark in the first half. With diligent coaching and a more athletic team, the Zips switched to a full-court press that wreaked havoc on the Flashes’ offense.

Junior Diamon Beckford led the Flashes with a career-high 21 points for the team and added seven rebounds.

The team shot an improved 10-13 from the charity stripe and was 8-21 from beyond the arch.

Over the next seven minutes, the Zips raged on a 20-2 run to change the tables for a while, but the Flashes did answer back when Akron switched back to a half-court defense.

By halftime, the Flashes managed to tie the game at 34 each with a lot of momentum to close the first half. Carrying over their hard work, the team came out of the break with the mentality to take the game over.

Again the Flashes started out right by going on another 10-0 run.

“This is our Duke-North Carolina,” junior forward Diamon Beckford said. “It’s a big game, everyone wants to show up, so making those runs was important to us. We played hard and we just wanted to beat them and just win some loose balls and try and get on runs as much as possible, which is something new for us because not a lot of times this season have we gone on runs.”

Once the Flashes reestablished the lead, the Zips came back again with a full-court press that troubled the team in the first half.

“I think we panicked a little bit in it,” Lindsay said. “They ran it at us in the first half and we handled it okay. The second half we were more tired, probably more mentally than anything else. It was a tough game and we just had possessions where we didn’t handle the pressure very well.”

In all, the Flashes committed 20 turnovers that Akron worked into 23 points and really hurt the team with the game on the line. Despite shooting 40 percent from the floor, it was the closing minutes that put the nail in the coffin for the game.

“We are an improving team,” Lindsay said. “We see the fact that we are improving. We just have to take a step above where we are right now and finish out games that we have leads in. It’s just a matter of us finishing games now.”