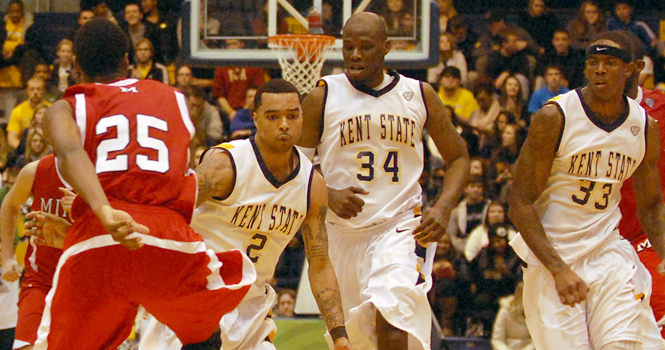 Michael Porrini, senior guard, dribbles the ball during the basketball game against Miami University on Jan. 11. The Flashes won 71-67. Photo by Nancy Urchak.

The Golden Flashes’ victory over Miami on Wednesday was their first in 2011-12 Mid-American Conference play, and their 64th conference victory at home since the start of the 2003-04 season. Kent State has made opposing visits to the Memorial Athletic Convocation Center unfavorable over the last 13 years. The Flashes are 165-26 (.864 winning percentage) at home since the beginning of the 1998-99 season and are 16th in the nation in total victories from 1998-2012 with 316 wins.

“Every game is important,” Senderoff said. “The crowd obviously has a huge impact on our team here, and the energy that they bring I think really helps us.”

Although he has confidence in his team, Senderoff believes that the Flashes’ comeback victory over Miami likely would not have occurred had the game been played in another arena. The M.A.C. Center atmosphere has played a favorable role for Kent State, and the team hopes it continues in 2012.

Kent State’s current players have fond memories of pivotal victories at home in past years. A favorite of the team is the Flashes’ 79-68 win over Akron at the conclusion of the 2010-11 regular season. The victory clinched the MAC East regular season championship for Kent State, its second in as many years. Junior forward Patrick Jackson was sold on Kent State during his visit to the M.A.C. Center, while he was a part of Rutgers’ basketball team in 2009-10.

Jackson’s impression of the fans and M.A.C. Center atmosphere has stayed true to form during his time at Kent State. He and the rest of his teammates are grateful for the support of the home fans, which was again on display versus Miami.

“We really can’t afford to lose a game at home,” Jackson said. “That’s why it was huge for us (Wednesday) night.”

The difference in the environment of road and home games is substantial to the Flashes. Kent State has endured unfavorable environments in past road games, including the notorious home fans at Utah State.

“On the road, we have to be our own fans, our own support,” Jackson said. “Our bench, we have to be in the game a lot. But here, they’re here for us regardless.”

Holt also agreed there is a positive difference in playing at home rather than on the road.

Kent State’s players are well aware of the importance of conference wins at home, and understand how much Wednesday’s night win mattered to their season. The Flashes enjoy playing in front of the home crowd and displaying their skills in pursuit of victory.

“Winning at home is very important,” Holt said. “Anytime you get a chance to go and play in front of your home fans, it’s always good and you always want to put on a show and definitely win the game.”

Kent State will continue MAC play on Saturday when the Flashes host Bowling Green at 7 p.m.