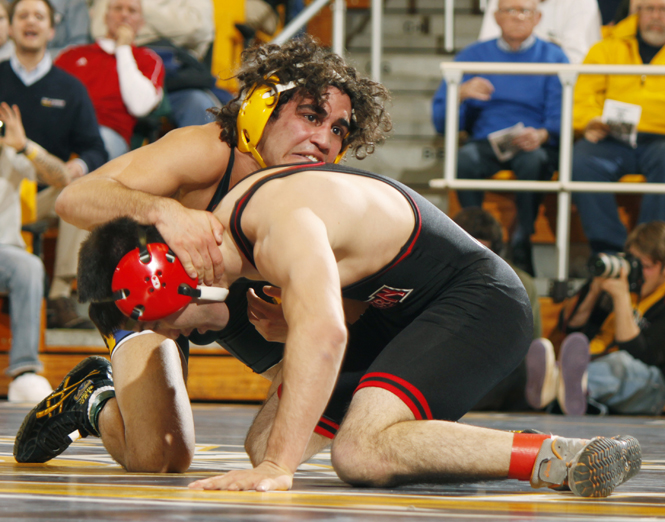 For 11 years, the Flashes have competed in the Virginia Duals. Despite having eight of the top 10 most-winning wrestlers in Kent State history compete in these past 11 duals, Kent State has never won.

The Flashes (8-4, 1-0 Mid-American Conference and ranked No. 23 nationally by Intermat) changed that Saturday against Missouri, a team that dismantled the Flashes at home Dec. 9, 34-12. Saturday, the Flashes hailed an 18-14 win over the No. 9 Tigers for the Virginia Duals Title.

Freshman Ian Miller, junior Casey Newburg and sophomore Tyler Small all capped off perfect 4-0 weekends with wins against Missouri. Miller avenged his early season loss with a win over Missouri’s No. 12 Kyle Bradley. Senior Nic Bedelyon fought a highly competitive match with No. 3 Alan Waters, but ended up falling in overtime, 7-5.

“Nic outwrestled the kid in my opinion,” head coach Jim Andrassy said. “He gave up a reversal and just lost it in the end. I don’t know if they’ll ever wrestle each other again, but if they meet in the national championships, I think Nic will beat him.”

One of the biggest upset wins for the Flashes came from sophomore Brandonn Johnson, who scored a 4-1 win over Missouri’s Patrick Wright. Wright is ranked No. 10 in the nation in the 174-pound weight class, according to InterMat.

(165) Senior Ross Tice returned from his injury and won one of his four matches. His lone win came over The Citadel’s Mike Harper, 8-4.

“(Johnson)’s had his problems this year, but he showed he can have success,” Andrassy said. “Once he figures things out, I think he can be more successful.”

With the score at 15-14 in favor of the Flashes, Barlow solidified the Virginia Duals Title with a 3-2 decision over Devin Mellon. It was Barlow’s own moment of revenge, as Mellon won their previous match Dec. 9.

After such a big victory, Andrassy saw a lot of good things from his team.

“Each match, we get a little better,” Andrassy said. “We just have to keep the pace and practice hard. We’ll take it day by day and just try to get better as a team.”

Andrassy said he was overall fairly impressed with the Flashes’ performance in the weekend tournament. They had defeated The Citadel 24-12 and Buffalo 22-12 Friday and Old Dominion 21-16 in the semi-finals Saturday.

“Overall, I think we did pretty good,” Andrassy said. “We started off slow. Our match against The Citadel wasn’t our best, but we still won. There’s a lot to analyze when you step back and look at it, but winning is obviously important to our guys.”

One wrestler to analyze was senior Ryan Buckner, who filled in the 197-weight class for the injured junior Keith Witt. Buckner stepped in and picked up an overtime victory in his first career dual meet over Buffalo’s Justin Heiserman.

Kent State’s next match will be in Athens, Ohio, Jan. 20 against MAC rival Ohio University. The Bobcats are 2-4 overall and 0-2 in the MAC.