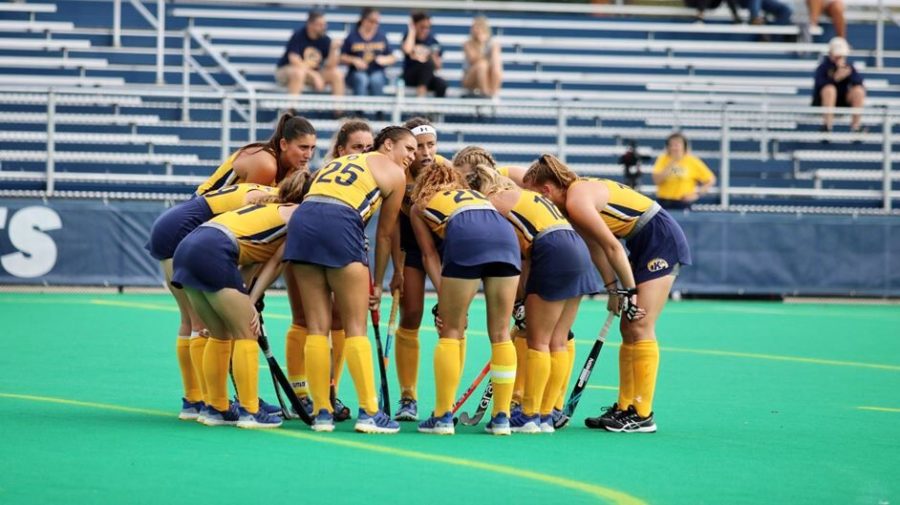 Members of the Kent State field hockey team huddle up during a match.

Just over six minutes into the fourth period, a Longwood penalty shot deflected off a Kent State stick into the net. That broke a 0-0 tie.

Six minutes later, the Longwood goalie dove for a save and missed. That left the net wide open in front of senior midfielder Helena Cambra Soler. But her shot hit the post, and Kent State’s best chance to tie the game went away.

“We had a lot of opportunities that were bad luck for us,” Cambra Soler said. “We couldn’t get a lot of outcomes, and we could’ve done a lot better.”

Kent State fell to Longwood University 1-0 in the semifinal matchup, eliminating the Flashes from the MAC tournament.

Kent State had five shots, with only one on goal. Longwood had 15 shots, 10 on goal.

“Longwood played a very good game and disrupted us,” coach Kyle DeSandes-Moyer said. “They put pressure on us, and we struggled to find our typical flow.”

Longwood had six penalty corners to Kent State’s five. But KSU struggled on corners this game, mishandling the ball on them.

“We weren’t able to execute on corners like we typically were able to,” DeSandes-Moyer said. “We have been strong on corners, especially the second half of the season, so that definitely hurt us. “

Fernsler said the team left everything on the field.

“Obviously, overall it wasn’t the results we were expecting,” Fernsler said. “We played our hearts out, everyone gave it their all and we played for each other.”

This was the first MAC tournament since 2019 due to COVID-19. DeSandes-Moyer hopes the younger players can learn from the experience.

“Because of COVID, this is the first MAC tournament for our freshman and sophomores which is a different experience,” she said. “I hope for those returners that they can use this as motivation for them in the offseason.”

Cambra Soler was proud of the team despite the loss.

“I am really proud of the team, and we worked really hard this season,” she said. “I think we deserved more, but that’s how sports work and I am excited to see where the team goes from here.”

Miami University will play Longwood for the MAC tournament title after Miami beat Ohio University 1-0. The game will be at 2:00 p.m. tomorrow.