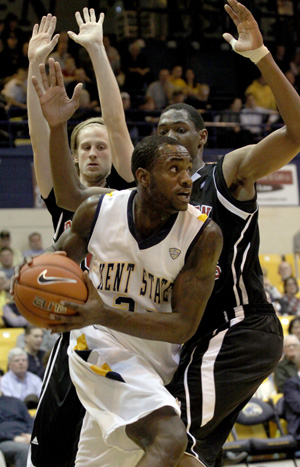 Senior center Justin Manns comes down from a dunk during Kent State’s game against Northern Illinois on Wednesday. Manns contributed six points in the 90-56 victory over the Huskies. Photo by Coty Giannelli.

Game highlights Kent State had a plus-22 advantage during the 26 minutes in which Chris Evans was on the floor. The Flashes have shot over 50 percent from the field in four of their last five games. Kent State was 11-2 when Randal Holt made more than one 3-pointer in a game (3-for-7 Saturday). Chris Evans scored a career-high 23 points Saturday night, is averaging 15.6 points per game, and has made 32 of his last 44 shots.

Trailing by six in the initial stages of Saturday night’s contest at Toledo, Kent State needed a spark. Flashes’ forward Chris Evans entered the game following a Kent State timeout and lit the proverbial fuse, as Evans canned a 3-pointer upon arrival and never looked back. With a perfect 5-for-5 from the field in the first half, including three 3-pointers, Evans led Kent State’s offense to a 35-31 halftime advantage. However, Evans would prove to be most valuable early on in the second half.

Toledo’s Rian Pearson began the second half with a quick bucket to bring the Rockets within two points of tying the game while Kent State relied on arguably its biggest strength: defense. Flashes’ senior guard Michael Porrini grabbed a steal and turned it into two points at the other end of the floor, and that was just the beginning of the Flashes’ defensive display. Evans stole the ball three times in the two minutes that followed, which resulted in four more points for Kent State. Suddenly the Flashes led by 13.

“My role off the bench is to come in and provide a defensive spark,” Evans said. “I want to just come in and bring a positive energy to the game.”

Evans, who finished the night with 23 points, led Kent State (14-6, 4-3 MAC) to a 77-61 victory over Toledo (10-11, 2-5 MAC) Saturday night in front of 4,720 fans at Toledo’s John F. Savage Arena. Kent State returned to its defensive roots and found success for the second-straight game. The Flashes forced 19 Toledo turnovers and scored 28 points off of turnovers en route to their second victory in a row and 26th-straight win against MAC West opponents, dating back to Feb. 2, 2008.

“We know that our defense opens up our offense, so if we concentrate on defense, our offense is going to be there,” Evans said.

The Flashes benefitted from a strong second half in which they out-scored the Rockets, 42-30. The scoring differential undoubtedly came as a result of the 12 turnovers Kent State forced in the second half, which resulted in 18 points.

“I think the turning point was when we forced the five-in-a-row there at the start,” Flashes’ head coach Rob Senderoff said. “Tonight, our guys just amped up their intensity level and that made a difference in getting those steals and points off turnovers.”

Kent State will continue its road trip Tuesday when the Flashes travel to Central Michigan to take on the Chippewas. Tip-off is set for 7 p.m., and will be broadcast live on SportsTime Ohio.