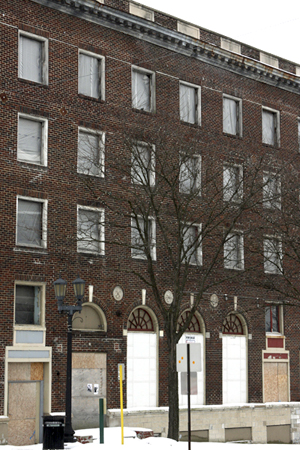 After years of Kent’s historic hotel sitting as an empty eyesore on the corner of Main and Depeyster streets, plans have begun to restore the building.

Ron Burbick’s organization, the Burbick Foundation, purchased the building from the City of Kwent for $400,000 roughly a month ago. Since then, Burbick has worked with a team to begin the initial development of the roughly $4 million renovation.

The restoration will be funded through $1 million of his own money and contributions from organization and individuals.

Burbick said the first work to be done on the hotel will be on the exterior, hopefully starting in early April when the weather allows.

“The idea is that it’s going to look pretty much like it looks today, except very cleaned up,” he said. “It will be re-grouted, we’ll have all new windows, but as far as changing the outward appearance, there won’t be much of a change.”

Burbick said he has many ideas of what will be going inside the hotel, but none of them are finalized yet. One such idea is to have the basement turned into a wine and jazz bar.

“It’s a real good location for it, the right atmosphere down there,” he said. “We’ve got five people interested in partnering on that kind of venture; one’s a wine guy, one’s a music guy, one’s a restaurant guy, the other two are money people that have an interest in

Working his way up the building, Burbick

said he plans to put offices on the main floor of the building. Burbick has already been offered materials from the Gougler offices on Lake Street.

“They are going to be (demolished) soon by their current owners, but they are allowing us to go in and strip what we want out of the interior of the building,” he said. “The three really upscale offices that were in there were built by a guy named Henry Christianson.”

Burbick said he wants to take the offices from Gougler and reinstall them into the main floor of the hotel for organizations to move into. There is also a roughly 6- or 7-foot safe Burbick plans to take from Gougler to install in the basement if it is used as a wine and jazz club.

The offices from Gougler were built about a year before the old hotel was built, and therefore have similar historic significance. This is important to Burbick because he wants to keep the historic feel of the hotel from its earlier days.

“We want to try to use as much reusable material as we can from town,” he said. “It doesn’t have to be from the hotel, it can be from wherever.”

As far as the rest of the building goes, Burbick’s architect Doug Fuller said Burbick is currently looking for businesses to move into the space.

“Ron is out to see what the people who call him have an interest in putting in there, whether it be retail, office, residential,” Fuller said.

“He also has a feeling of the market of what he thinks will be a good use for the building.” Because Burbick plans to redirect all revenue from the building back into the city, he said he must also house a certain number of nonprofit organizations inside.

Along with the nonprofit nature of the business, Burbick said he will set up a reserve fund for the hotel. He will take 20 percent of the income out each year for repairs.

“We want to set it up so that it can sustain itself, we don’t want to have that eyesore up there like we do now,” Burbick said. “It’s going to take a lot of work and a lot of effort, but it will be a much better facility when it’s all done.”

Fuller said Burbick estimated to have the first three floors, including the basement, open in the next year.

“I know Ron would like to have some parts of the building open as early as a year from now,” he said, “But the goal won’t be reached unless he finds the right fit, the right uses on each floor.”

Burbick said he understands the intense task of taking on the restoration of the building, and is prepared to put in the time and energy necessary.

“I always say it’s like a woman putting on makeup: first you’ve got to take everything off before you put everything on,” Burbick said. “That’s what we’re going to be doing first, but the end result is going to be an improvement.”