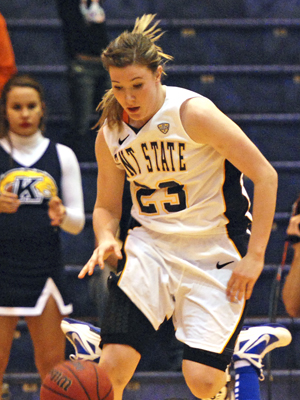 Freshamn guard Jamie Hutcheson carries the ball down court on Friday, Nov. 18 against Morehead State. The Flashes beat the Eagles 65-64 in their home opener. Photo by Matt Hafley.

There never is a whole lot of good things to say about a 68-33 loss other than the young Kent State women’s basketball team (1-6) still has a lot of room for improvement.

Kent State coach Bob Lindsay intentionally put this schedule together to put his young team to the test early. Tuesday night at a very tough mid-major program, the Flashes fell hard to a talented Temple team (4-5) that is favored to win the Atlantic 10 Conference.

Junior points leader Trisha Krewson struggled all game with an injured wrist and went 0-for-9 from the floor to open the door for someone else to step up. That person was Itziar Llobet, who finished the game with 13 points, two assists and three rebounds.

Junior transfer Diamon Beckford also stepped up her game in the scoring column adding 11 points of her own and a team-high five rebounds.

“I thought Diamon and Itchy (Itziar) played hard tonight,” assistant coach Lori Bodnar said. “We saw a different side to Diamon shooting the three and Itziar played a good all-around game for the most part and came up with some steals.”

Off the stats sheet, the biggest difference came in the Owls ability to create second chance opportunities from its own misses. Temple out-rebounded the Flashes 25-to-6 that led to 22 points for the Owls.

“I thought in the first half giving up offensive rebounds hurt us,” Bodnar said. “If we took care of the basketball more we would have been right with them.”

Shooting themselves in the foot, the Flashes committed 24 turnovers that translated into 16 points for Temple. The Owls did turn the ball over as well but only 12 times. With those extra possessions, the Flashes were able to get 12 points from them.

Where the Owls did most of the damage in the points columns was in the paint, outscoring the Flashes 40-to-12.

By half time the Flashes trailed 32-12 with little hope of coming back, but what makes this team a competitor-to-be in the future is the tenacity of all the players on the court. Five freshmen made the road trip and all five saw the floor and even ate up more minutes than their experienced counterparts.

“We have to continue playing tough on defense and on offense we need to take better care of the ball and crash the boards,” Bodnar said.

The Flashes will return to action Sunday Dec. 18 at 2 p.m. against Canisius.