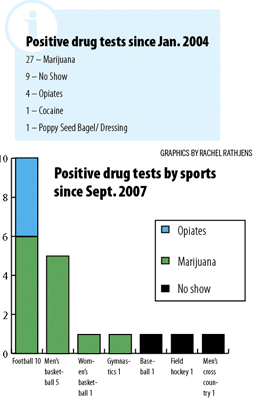 Forty-two Kent State student-athletes have failed drug tests since the winter of 2004, mostly for marijuana use, according to data from a series of records requests to the athletic department.

Of the nearly 450 Kent State student-athletes, around 10 percent are randomly selected on several days throughout the semester to be screened for “street drugs.” More athletes can be tested at the request of a coach or athletic department administrator, explained Trent Stratton, Kent State’s sports medicine director, in an email.

The tests are administered by the Kent State training staff who send the athlete’s urine sample to the Aegis Science Corporation in Nashville, Tennessee, for analysis, Stratton wrote in an email.

The lab’s “Zero-Tolerance Drug Testing” option, described by their website as “the most accurate drug test available,” screens for more than 400 drugs, including marijuana, amphetamines, opiates, cocaine, ecstasy and barbiturates.

The athletes, either selected randomly or by a coach or administrator, are notified the morning of the tests. A missed test, knowingly or unintentionally, is treated as a positive test and is ineligible until they get tested.

“If there has been a history with a specific group of individuals, we may test more than 10 percent,” Stratton wrote. “The increase in number can be for suspicion.”

Marijuana was the most commonly used drug among Kent State student-athletes who tested positive for a drug, accounting for 27 of 42 failed tests since 2004.

According to a 2007 records request from the Salt Lake Tribune, an average of nearly 40 athletes were tested on 24 days between January 2004 and April 2007 – typically three or four tests per semester. The 958 total tests during that period resulted in 22 positive tests: 14 for marijuana, six for missing their tests, one for cocaine in September 2005 and one for “poppy seed bagel/dressing” in February 2004. (That positive test didn’t count against the athlete.)

Of those 22 positive tests, one athlete tested positive twice for marijuana in 2006 and was suspended, and one athlete left the team after a missed test in February 2007 — it is unclear whether the athlete or athletic department staff made that decision. The athlete who tested positive for cocaine in September 2005 did not test positive any other time, records show.

The sports of the athletes who tested positive during that period were not included in the records requests compiled by former trainer John Faulstick, and Stratton, who became sports medicine director in the spring of 2009, did not have that information available.

From the fall of 2007 through the most recent tests in October, 20 student-athletes tested positive, according to data provided by Stratton: 13 for marijuana, four for opiates and three for missing their tests. There were no positive drug tests during the 2009-2010 school year.

However, a request for the sports of the positive-testing athletes since 2007 was successful. Ten football players failed drug tests during that period: six for marijuana and four for opiates.

Without specifically referring to the football players who tested positive for opiates, Stratton confirmed in an email that if an athlete has a legal prescription for a drug, it does not count as a positive test if it shows up in the screening and would not be on the list of failed tests.

The athlete must then go through counseling and additional drug testing, at the player’s expense, or they will be charged with a second positive test.

After a second drug test, the athlete will be suspended for a full calendar year.

Stratton emphasized the importance of working toward no positive tests.

“To me, any number of positives is a problem,” he wrote. “We do understand that college students are trying to balance their freedom from home with freedom to make their own decisions and create their identity but the department does not want any of our student-athletes to be associated with such behavior.

Emailed requests to all other Mid-American Conference schools on October 24, seeking their drug test results since the fall of 2007, were mostly denied on the grounds that the records are federally protected. Others went ignored.