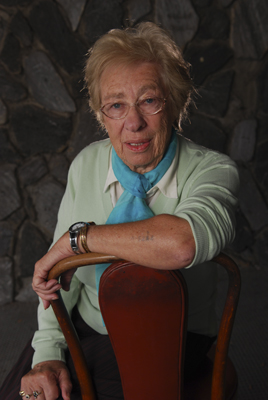 Holocaust survivor Eva Schloss, 82, looked at her prisoner identification number on her arm that she received in 1944 when she and her family were sent to the Auschwitz-Birkenau death camp. Photo by Monica Maschak.

“At night we see the flames. They burn 24 hours. You can smell the flesh,” said Abby Bedwell, an actress playing Holocaust Survivor Eva Schloss.

“You can only deal with it by not believing,” said Emily Schrader, an actress playing Schloss’s mother.

“But we know 100 percent, we know, but we just say that just such a large camp has so much rubbish to burn, and that is what is burning,” Bedwell said. “Just pretend it isn’t true.”

Bedwell and Schrader acted out this key scene in the play “And Then They Came for Me: Remembering the World of Anne Frank” on Tuesday at the Kent Stage. The play, a free event, was followed by a Q-and-A with Schloss herself, who is also known for being the stepsister of Anne Frank.

The audience stood as Schloss walked on to the stage where she took questions for roughly 40 minutes. She described her emotions as she went through Auschwitz and how her experience is still affecting her today.

“The death chambers were built very similar, so we never knew if we were going to a shower or a death chamber,” Schloss said of the camps.

Schloss has seen the play several times, but she said each time is emotional.

“The Holocaust is something that if you don’t live through it, you can’t imagine it,” she said. “It was indescribable.”

The play, based on interviews with Schloss and Ed Silverberg, also a Holocaust survivor, began in 1938 when the events of the Holocaust began. It demonstrated how Schloss went into hiding, the separation from her father and brother, who both died in the camps, and when and how she was liberated.

The audience remained silent as the performers talked of life in the camps.

“Men and women to different sides,” said Lani Skelley, an actor playing Anne Frank. “We were immediately separated from father.”

“It is the middle of winter,” Bedwell said. “It is unbelievably cold. November, December we have no shoes, no clothes.”

“The itching and the lice,” Skelley said. “I couldn’t take it anymore I ripped off my clothes and wrapped myself in this blanket it’s all I have.”

“It’s not just that,” Bedwell said. “We are hungry, dirty and also have to work hard. Are we going to make it through tomorrow?”

Buses from middle and high schools throughout the area brought students to the play, nearly filling the venue.

Sarah Greenblatt, director of Jewish Studies Program at The Lippman School, said the program teaches a piece on the Holocaust every year, but this production went further than those lessons.

“We are so lucky that Kent did this, Greenblatt said. “We do a unit on the Holocaust every year, but this was a fabulous opportunity. It makes it real — it’s better than reading a novel.”

Joy Mitchell, a junior from Cleveland Heights High School, said she was amazed by the play.

“Just to know that some of it actually happened is devastating and tragic,” Mitchell said.

Esther Hexter, who had seen the play before, said she admires Schloss’s courage, but was moved at how the young audience remained attentive and respectful.

“The majority of the students in here are middle school and high school students, and it was completely silent in the auditorium during the entire play,” Hexter said. “That shows tremendous respect.”