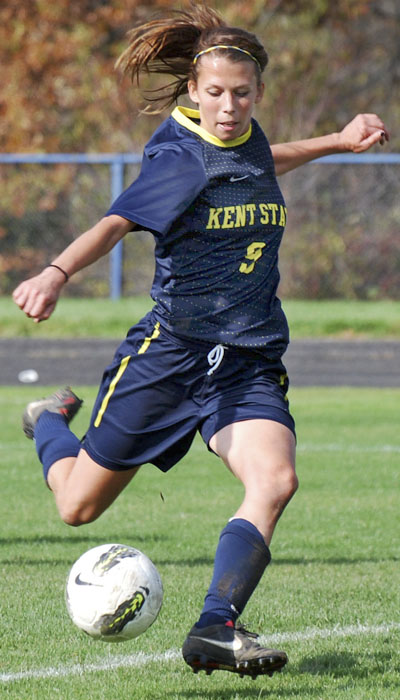 Kent State forward Megan Repas kicked the ball for the winning goal in the last seconds of the game against Ohio University on Oct. 23. The Flashes beat the Bobcats 1-0. Photo by Monica Maschak.

Rarely do two teams end their seasons against one another then meet in the first-round of the playoffs, but that’s just what happened to Kent State and Buffalo.

The women’s soccer team fell one goal short of ending the 2011 season on a high note Thursday as Buffalo got a much needed 1-0 victory over the Flashes to grab a spot in the Mid-American Conference playoffs.

Scoring 36 minutes into the game, the Bulls grabbed the lead then hung on tight for a big win over an already cemented MAC playoff team and the Flashes had no answer.

Putting pressure on the Flashes defense all game long, the Bulls had a heavy advantage in shots with an 18-7 advantage. Although most of the pressure came in the first half for Buffalo as they outshot the Flashes 12-1, an adjustment at half-time slowed the Bulls threat.

“I just didn’t think we had a good enough start,” Kent State coach Rob Marinaro said. “After they took the one-nothing lead I thought we played a lot better. I thought we started winning a lot more of the 50-50 balls and first and second balls, but we’ve got to play a complete game, especially as we move into the playoffs.”

Very uncharacteristic of the Flashes this season, the team registered 12 fouls that fueled the Bulls push early in the game.

Marinaro knows his team learned a lot today against Buffalo to set them up well for a rematch on Sunday at Zoeller Field.