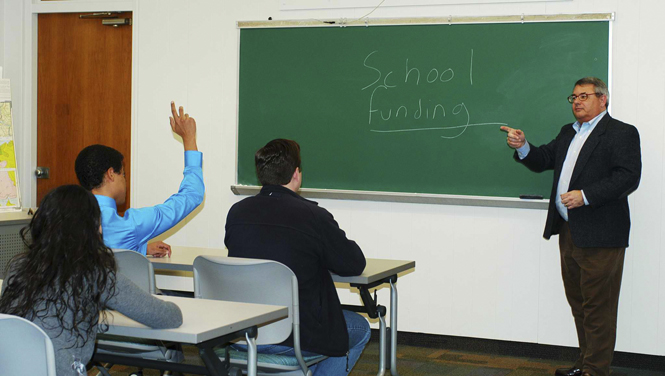 Anna Staver
Why should I care?

Kent State may soon have a faculty member representing it in the Ohio Senate. Jamie Callender, a political science instructor, is interviewing Wednesday to fill an open seat for the 18th District.

“I want to make sure that someone like me is down there that is going to continuously fight for education,” Callender said.

A committee of seven Republican state senators will recommend a candidate to fill the open seat left by Sen. Tim Grendell (R-Chesterland), who was appointed the judiciary by Gov. John Kasich.

Then the full, 23-member Senate Republican Caucus will make a final determination and seat a new member after the Nov. 8 election.

The 18th District, as it’s drawn now, doesn’t include the university. That will change when the new boundary lines go into effect Jan. 1 because it will morph to include Kent State and all of Portage County.

Sen. Tom Sawyer (D-Akron) currently represents Kent State; however, Callender (R-Concord Township) said he thinks the university would benefit from having a professor as a representative.

Callender, a Republican, co-teaches the Columbus Program in Intergovernmental Issues with professor and state Rep. Vernon Sykes (D-Akron), of the 44th District.

He said he thinks Callender would be able to balance teaching and serving as a state senator.

Sykes said he’s known Callender for about 10 years. The two men served together in Ohio’s House of Representatives. Callender served four two-year terms before being term-limited in 2004.

Sykes declined to comment on whether he thinks Callender would be the best choice for the open seat, but said Callender did an excellent job during his previous tenure in the Statehouse.

While in the Statehouse, Callender served as chair of the House Education Committee. He helped Ohio expand its allowance for school choice, particularly charter schools.

“We put our school board and local schools in a really tough financial bind because we say you have to do X, Y and Z,” Callender said, “But then we don’t give them the money to do that.”

Callender said he has started about 30 charter schools, including Eastern and West Cleveland Drop Back In Academies. According to the Ohio Department of Education’s website, two of Callender’s schools rank in the bottom third in Ohio for performance, three are in the bottom 10 percent and one is in academic emergency.

Kent State alumnus Rich Cline went on the Columbus Program in 2006. He said Callender’s teaching style was different from any other professor he had.

“It was very thought-provoking and very discussion-provoking; he very much challenged your view points on important issues,” Cline said. “He helped you find out why you think the way that you do about certain issues.”

Kent State alumna Lizz Eisaman agreed. She now works as a political adviser for Ohio House Speaker Bill Batchelder. She said she couldn’t comment on whether Callender would be a good fit for the Senate seat.

“He’s a good man, but I don’t want anything to sound like the Speaker’s office endorses him as a candidate,” Eisamen said.

Since graduating, Cline was elected to the city council in Tiffin. He said Callender advised him on running his first campaign, and took the time to help him talk through a few issues during Cline’s first term in office.

“If he would be so willing to help a former student, that is all the more reason why he would do an excellent job serving the people of Kent and the students of Kent State University as state senator,” Cline said. “I can’t imagine anybody having better qualifications than what Jamie Callender has for the job.”

The Daily Kent Stater had the opportunity to ask Professor Callender what he thought about a few issues that could affect life on campus.

Q: What do you think about Issue 2? (The upcoming voter referendum to repeal Senate Bill 5, Ohio’s controversial law that severely restricts collective bargaining for public employees.)

There are elements of Senate Bill 5 that I very much agree with and I think we need, like teacher tenure reform and creating some form of merit pay within the educational establishment. And there are elements that I wasn’t happy with it.

The problem with SB5 is that it has created an antagonistic environment between public employees and folks on the governing end — a labor-management war. And the state doesn’t really need that right now.

Q: What do you think about Issue 3? (A proposed amendment to the state constitution that would exempt Ohioans from several key components of the federal health care law.)

I think Ohioans have the right to design their own health care program and their own rules. I believe in federalism as an academic concept.

Q: President Lester Lefton and the university have been struggling to secure a $250 million bond to make upgrades and repairs to buildings on Kent State’s campus. Chancellor Jim Petro has voiced some reservations about the university raising student fees to help cover costs. Where do you stand on the issue?

Generally, I think utilizing the issue of publicly issued bonds to make improvements is a good idea. But I think it goes back to making sure that the legislature provides adequate funding for higher education. I think a lot of the hurdles are people trying to balance the budget on the backs of higher education, and I would fight against that.

Tuition is certainly a concern. We want to make sure that the state does what it can for the university to keep the tuition low. If you see state cuts, tuition goes up, which drives down attendance, which creates a vicious cycle.

Q: House Bill 256 would allow people to carry concealed weapons onto Ohio’s university campuses. Although this bill is still in the House, if it ever got to the Ohio Senate, how would you vote?

I’m supportive of that. I’m a political science professor with a degree in history, and the cornerstone of our country is the Constitution. And the Second Amendment is really clear about the right to bear arms. I know a lot of folks don’t agree with me on that, and they think times have changed.

Q: A Columbus bar is challenging the five-year-old ban on smoking in bars in Ohio. Do you think the current prohibition is a good policy?

I believe that a lifting of the smoking ban for bars and clubs is appropriate and good public policy.

Editor’s note: The Daily Kent Stater was unable to obtain the name of the other schools started by Professor Callender. The schools cited in the story are the schools he gave as an example during an interview.