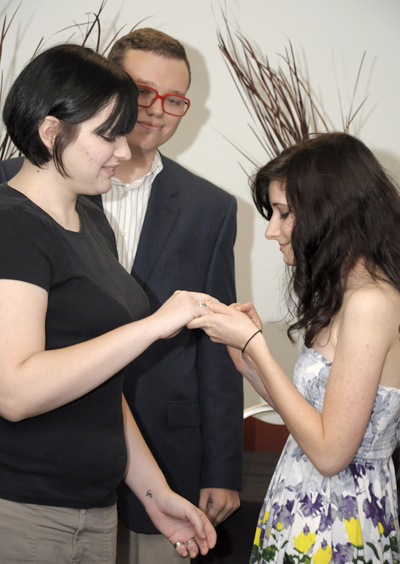 The familiar tune “Bridal Chorus” played from a laptop in Room 317 of the Student Center as friends and well-wishers of a happy couple stood to watch the brides — both of them — walk down the aisle.

Yana Grinblat, senior architecture major, “married” her girlfriend Kelsey Robinson, Kent alumna, in front of a crowd of approximately 20 Wednesday. The ceremony, “Uncivil Unions: An Exercise in Marriage Equality,” was a protest against Ohio marriage laws.

Robinson decided to “marry” her girlfriend after reading about it on Facebook.

“I believe in marriage equality,” Robinson said. “I love my girlfriend.”

Bridesmaids stood with orange daisies as the brides, Grinblat in a floral-patterned dress and Robinson in dress pants and dress shirt, walked down an aisle strewn with fall-themed beads.

Rebecca Lazarus, senior biology major, served as a bridesmaid in the wedding. She said she and Grinblat have been friends since sixth grade and roommates since their freshman year.

“I’m just really excited about what happened today,” Lazarus said. “As an ally, I feel like this is really helpful toward a movement toward gay marriage. It would have been a lot more effective outside, but it got the point across.”

The event was postponed from an earlier date in order to accommodate the “newlyweds,” said Corey Moore, president of Kent Student Liberty Alliance, who presided over the exchange of vows.

Robinson said she and Grinblat met at a scavenger hunt with PRIDE! Kent during Grinblat’s freshman year.

“We became Facebook friends through that, and then we were both going through break-ups at the same time and started talking to each other a lot more,” Robinson said.

Grinblat said she and Robinson were friends for several months before they began dating.

“In the years they have been together, (Robinson and Grinblat’s) love and understanding of each other has grown and matured,” Moore said during the ceremony. “Now they have decided to live their lives together as a fabulous gay couple.”

After the couple said “I do,” they kissed and exchanged rings to enthusiastic applause from family and friends in the Kent Student Liberty Alliance, PRIDE! Kent and Gay Rights Revolutionaries.

“We came up with the event during a meeting, and basically this is sort of a protest against the law that says you cannot marry a homosexual couple,” Moore said. “We’re just trying to bring people together through the most beautiful thing in the world, which is marriage.”

Moore said the original plan was to marry multiple couples on Risman Plaza, but only Grinblat and Robinson volunteered to participate in the event, which was moved inside due to rain.

“We’ll have to try this again in the spring,” Moore said.

Lazarus said she wishes more allies would work with LGBTQ individuals in the effort to legalize gay marriage.

Although “Uncivil Unions” was a group effort, Kent Student Liberty Alliance treasurer and secretary, Sarah Metzger said she handled much of the planning herself.

“Being a fellow gay, I felt like it was part of my challenge,” Metzger said. “I feel like it’s going to be our generation that legalizes gay marriage.”

Grinblat and Robinson said they hope to get married for real some day.

“I’m sad that I don’t have the option at all to get married in Ohio or a civil union or anything like that,” Robinson said. “It would be nice to stay in a state that I’m so attached to, but it’s nice that we can do something like this that is cute and kind of honored the kind of relationship that we have.”

“This is a lot of fun, but I want the real thing.”