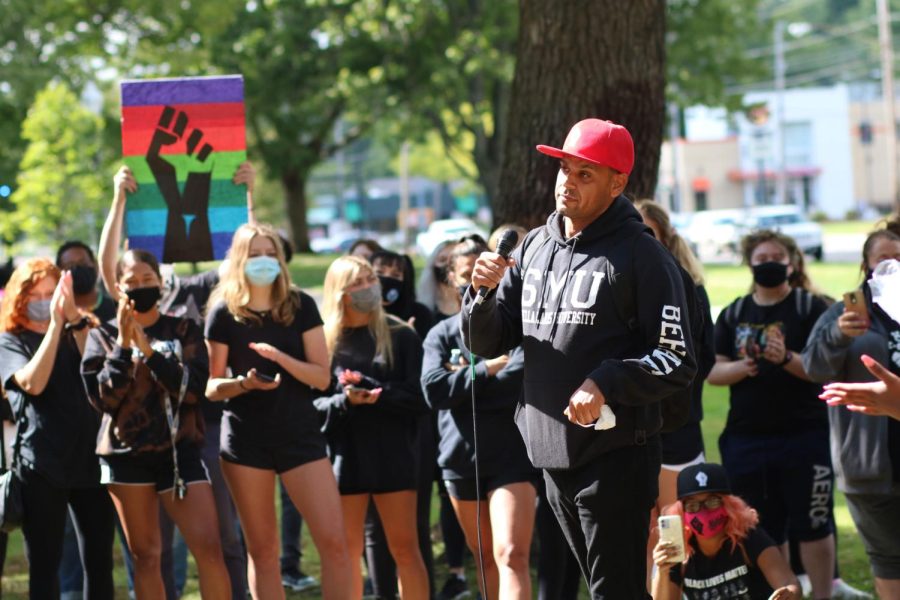 Tony Correa speaks about a LGBTQ+ sober home while a protester holds up a gay pride and Black Lives Matter sign in the background on Friday, Sep. 11.

Tony Correa, the founder and executive director of B.Riley Sober House, described the issue of discrimination of the transgender community, specifically Black transgender women, in places such as detox centers, treatment centers and prisons.

He said these types of places lack “cultural competency.”

“I think it’s important that we as LGBTQ+ folks and allies, I think that it’s important to let our Black brothers and sisters and non-binary siblings know that … we hear you,” Correa said.

This inclusion of both communities was also seen on campus earlier last week, when four members of Kent State’s women’s volleyball team painted a rainbow flag with a clenched fist on the campus rock.

Savannah Matthews and her three teammates added their painting last Monday night to cover up what was written earlier in the day.

Prior to Matthews’ painting, the rock read “Blacks have no home here.” Over the past couple weeks, there has been a cycle of Black Lives Matter paintings covered up with different forms of “white lives matter” and racist messages.

However, what differentiates Matthews and her teammates’ painting from the other Black Lives Matter artwork is the inclusion of the rainbow, or gay pride, flag.

Matthews decided to include all the different colors of the flag because of what it represents to her.

Tony Correa also explained the importance of this inclusivity on campus by saying “we’re all in this together” and “we’re all here in the same world, working amongst each other.”

“It might not even be now that I see you have,” Correa said. “It might be later on in the future, but somehow, somewhere, I feel personally that we’re all interconnected one way or another.”

Bella Hagey is a diversity reporter. Contact her at [email protected]