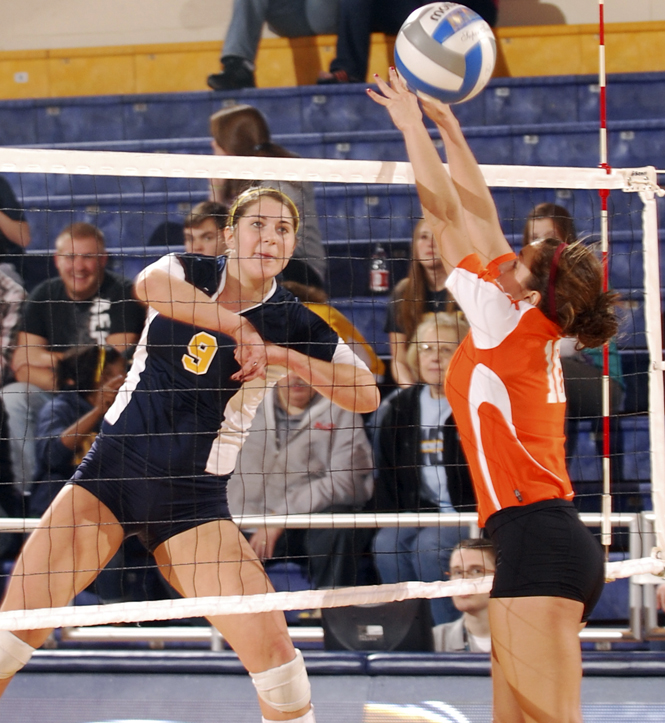 Senior outside hitter Lauren Jones hits the ball between the hands of Bowling Green's defense. Photo by Philip Botta.

Kent State volleyball demolished its six-match losing streak with a win against Miami in a Mid-American Conference match Saturday, Oct. 29.

The Flashes forced a five-set match and required dedication from the players. This match brought the team’s overall record to 9-18 and Mid-American Conference record to 2-10. The Flashes’ comeback win became their step in the right direction to continue the season.

“We need to continue (winning),” said Kent State coach Glen Conley. “That’s what we’re looking for right now is that consistency. That’s who we are. This is a step in the right direction. I guess staying on track is going to depend on our serve-receive and our defense.”

“This weekend was huge,” Krupa said. “We learned how to fight. We all knew what we had to do. I think we got that urgency and intensity, and we just wanted it so bad.”

The team found the focus to finish the match even though it had to fight back from a 2-0 deficit.

“We’ve had a good week of practicing,” Conley said. “We’ve been consistently improving week by week. It really helped us tonight. It showed tonight.”

Kent State’s second MAC win topped the team’s first win three weeks ago. The Golden Flashes hit 55 kills against Miami. Two more than in its match against Buffalo Oct. 7. After winning both matches in five sets, Kent State improved to 7-2 in five-set matches.

“We accomplished being focused and fighting through when we were down,” said freshman outside hitter Tinuke Aderemi-Ibitola. “We played really well. We fought hard.”

“We wanted it so bad,” Krupa said. “We were so determined that we were going to do anything it took to win and fight.”

The Flashes kicked off the weekend with a loss to Bowling Green on Oct. 28. Larsen and Krupa led the team with seven kills each. Freshman middle back and outside hitter Lauren Engleman scored a match-high four blocks. Nowak hit 21 set assists. Grdina totaled 12 digs.

“They’re starting to believe in themselves as much as I believe in them,” Conley said. “They can become a good team, and we do have the basics for a solid foundation. That’s really what I hope they accomplish.”

The Flashes will finish off their streak of away games at Ohio Thursday, Nov. 3 at 7 p.m. The team will finish the season with three home matches.