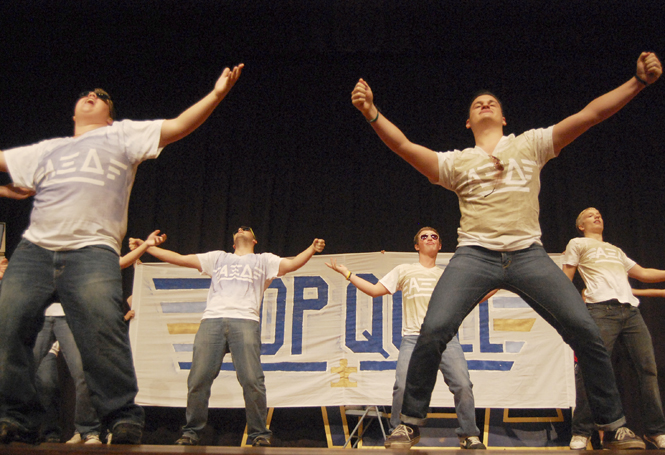 Members of Sigma Nu perfom a skit at the annual Xi Man competition on Oct. 7. The competition raised money for Autism Speaks. Photo by Nancy Urchak.

The Alpha Xi Delta sorority presented a check Friday night totaling $14,842.25 to Autism Speaks at the conclusion of their annual Xi Man competition.

“We’re really excited,” Brino said. “We’re happy it was bigger than it was last year, and we met our goal and exceeded it.”

According to Alpha Xi Delta’s fundraising page on GiveForward.com, Autism Speaks is a non-profit organization dedicated to funding research into the causes, prevention, treatment and a cure for autism.

In April 2009, Alpha Xi Delta entered into a national partnership with Autism Speaks and has raised more than $400,000 for the organization.

They started off the week with a fundraising opportunity at Beef O’ Brady’s, where 20 percent of the proceeds went to Autism Speaks. On Tuesday, Alpha Xi Delta had donation tables in the Student Center, and on Wednesday a speaker came to talk about Autism. Admission for the speech was $2 if spectators wore blue for autism awareness and $4 if they did not. A penny war between fraternities also helped raise money throughout the week.

Brino said Thursday was dress rehearsal for the Xi Man competition and Friday was the big event. Admission for it was $3.

The theme of the event was A Night at Xi Movies and fraternities put on a skit or a dance number based on the theme.

“They must select a movie and songs from that movie’s soundtrack within the performance,” Brino said.

Dunick said the Xi Man competition was like a dance recital, and the fundraising was a huge aspect in determining the winner of Xi Man.

“I thought tonight was awesome,” Gabriel said. “There was so much support. It was amazing.”