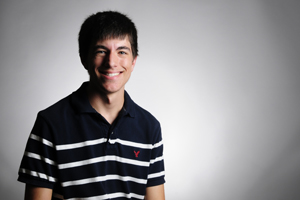 My experience of Sept. 11, 2001, was much different from most people my age. Instead of being in school, I was spending a fifth day in the hospital with a staph infection. A nurse alerted me to turn on the television after the two planes had flown into the World Trade Center.

In the 10 years since, had an interest in learning about the attacks. I’m not sure if that’s because I’m a journalism student or because the staph infection left me bedridden for days and 9/11 coverage was essentially the only thing on TV.

All along, the dominant story has been the two hijacked planes that went into the twin towers, and rightfully so — to an extent. The crashes happened in such a congested area; 2,753 of the attacks’ 2,977 casualties were people in New York City.

This is especially unfair to the brave passengers of United Airlines Flight 93, which crashed in a Pennsylvania field. The passengers fought back and prevented the hijackers from hitting their intended target, saving many other lives.

The passengers had luck on their side. The hijackers had waited an oddly long time before taking control of the plane, which meant they were much farther away from their target than any of the other three planes had been. This also allowed the passengers more time to call their loved ones and discover two planes had already hit the World Trade Center. The hijackers’ delay caused the passengers to find motivation to revolt.

We don’t give enough credit to that part. The hijackers’ intended target was almost surely either the Capitol or the White House. Could you imagine if they had managed to damage either of those buildings? They probably planned it as the icing on the cake in their plans.

That isn’t to say 9/11 wasn’t a tragedy since that plane missed its target. Obviously the attacks were far more awful than words can describe. But think about it: We don’t typically consider the World Trade Center or the Pentagon to be among America’s most notable buildings; as a fifth grader watching the news coverage, I had never heard of those places before.

In contrast, the White House has far more history and importance. Although President Bush was in Florida that day and everyone had evacuated the White House before the hijackers could have reached it, flying a plane into the ultimate American landmark would have multiplied the tragedy tenfold and shattered our hearts even further.

We owe a lot more appreciation to the Flight 93 passengers who revolted and stopped the hijackers from fully succeeding. Sept. 11, 2001 will always live in infamy, but they kept it from becoming much worse.