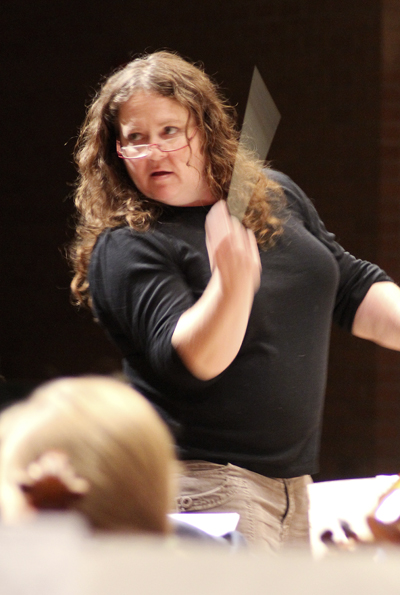 For the first time Kent State School of Music has a female orchestra conductor.

Liza Grossman, the new orchestra conductor, said she hopes to bring in larger audiences to concerts through modern composers’ pieces.

“I think it’s equally important that we recognize the composers of our time who are here because they deserve to have their music performed by living orchestras,” Grossman said.

Grossman graduated from Cleveland State University in 1993 with degrees in music performance and music education. She is the founder and director of the Contemporary Youth Orchestra in Cleveland. She conducted orchestral rock performances with artists from well-known groups such as the Doors, Styx and Jefferson Starship.

Denise Seachrist, director of the School of Music, said she was impressed with Grossman’s work with the youth orchestra and thought she would be a good addition to the music program.

“I’m looking for excellence in teaching, and I thought she could bring that,” Seachrist said. “I wanted our kids to have a good learning experience as well as a great musical experience.”

Grossman is the first conductor to make contemporary pieces the main focus of concerts, Seachrist said.

The music choice reflects elements in the world, Grossman said. The orchestra will focus on the following: Arturo Màrquez’s Danzòn No. 2; movies, TV and cartoons; and Tan Dun’s Dragon and Phoenix Overture.

“Audiences are changing,” Grossman said. “There is more demand for music that people can wrap their hands around and feel a part of what is created.”

When the audience hears this music, for example the Tom and Jerry cat chase, it can picture the scene and relate to the music, Grossman said.

“The conductor, Ms. Grossman, is just full of energy,” Jose Herrera said. “She doesn’t let you think of other things or go anywhere else in your mind. She is always asking things of us, and I think that’s cool.”

Grossman said she hopes the audience will be moved and inspired through the music.

“Audiences should be involved in what is happening on stage,” Grossman said. “It is crucial that we recognize although the musicians on stage go through many different experiences while learning this music, it’s also important to recognize we are there to make our audiences feel something or react to something.”

Grossman said she and the orchestra are there for the same purpose — to create and experience.

“We are bringing life to something that is written,” Grossman said.