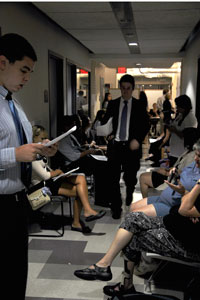 Students rehears while waiting to audition for a place on TV2 Wednesday, Aug.31. Photo by Megann Galehouse.

Not all students trying out for TV2 are broadcast majors. Wyana Wright said she always wanted to do broadcast but changed her major last minute. The TV2 auditions were an outlet for Wright to be involved in something she enjoys even though she changed her major.

Wright had little information about TV2 but said it seemed like fun. Trying out for the first time for the news desk at TV2, Wright said the process went a lot better than she expected.

Each student had to read an article and produce a 25-30 second story.

To prep for the audition, Wyana isolated herself and rehearsed the given script.

“I like that they gave us a script, so it’s not solely memorizing things,” Wright said.

Adam Harder took a different approach to prepping for his audition. Harder casually walked the crowded hallway, talking to friends and reading over his script.

If selected, this will be Harder’s second year working with TV2. Harder said the environment and everyone’s enthusiasm brings him back to audition.

“I love the laid back atmosphere of TV2,” Harder said. “It’s got the real station, and we’re professional, but we also have fun and goof around.“

This will be Harder’s last year with TV2, as he will be leaving in October for Italy for a broadcasting job with the Air Force. Harder said getting hands-on experience is the best way to prepare for the real world.

Nina Piskunoff waited behind dozens of students for her turn to audition for TV2. She said her friends who are involved with the newscast encouraged her to sign up.

She also said working with TV2 would help expand her major and prepare for a future internship with Fox 8.

Piskunoff said other than the unexpected crowd and waiting around, the process was going smoothly.

Sitting on a bench, surrounded by other applicants, Sean Eiler quietly read his script to himself.

“I’m not as nervous as I expected,” Eiler said. “I didn’t realize this many people would be here, though.”

Eiler said he was excited to try out and potentially be a part of the team.

“My goal one day is to be an anchor for ESPN or something like that,” Eiler said. “I want to get as much experience as I can from the start. It also doesn’t hurt to try out, and it looks good on a resume.”

“I’ve never tried out for something this intense before,” he said. “I’ve only done the school news for my high school freshman year.”