Opinion: Hollywood in my hood 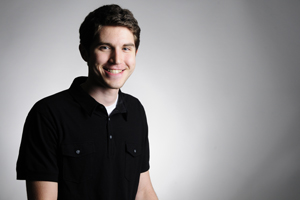 Mike Crissman is a junior newspaper journalism major and columnist for the Daily Kent Stater. Contact him at [email protected]

Partying in a house with others dressed in absurd Halloween costumes is something most college students can relate to. Doing it in the same room with cameras, a Hollywood film crew and comedian-actress Chelsea Handler? Not so much.

Such was my experience over the summer working as an extra in the Paramount Pictures movie “Fun Size.” For eight days of 12-hour shoots for two scenes, I got paid to wear costumes given to me by the film’s wardrobe department, walk around and (occasionally) act. Even cooler, I got to be on the set of a living, breathing major motion picture.

The movie also stars Johnny Knoxville and Nickelodeon teen star Victoria Justice. It is a coming- of-age story about a girl who loses her brother on Halloween and embarks on an adventure-filled night to find him.

The plot may seem lame at first glance; however, the assistant director on set described the story as a cross between “Superbad” and “Adventures in Babysitting.” To my relief, the party scene I was in with Chelsea Handler did feature half-naked girls, keg stands and lots of fake alcohol. Sure, I’d whore myself out like Nicholas Cage to be in any Hollywood movie, even if it was terrible. Thankfully, the scene I was in had all the best things.

“Fun Size” is one of many other big-budget films set to showcase Cleveland in the near future. State tax breaks and a diverse area of looks and locations have attracted a number of Hollywood filmmakers to the area. Of the 27 films approved for the Ohio film tax credit, 21 are currently slated to film in Northeast Ohio.

All this movie business is an exciting new development for a city trying to overcome a decades-long slump as a dying manufacturing-industrial town. The creation of jobs for the region has, and will continue to be, more important than any celebrities that roll through Cleveland. It’ll be nice to watch the credits after some of these movies and know a large portion of the names were locally hired people who were able to be put to good use.

There were many memorable moments for me during the eight days on the “Fun Size” set. Like the first take of the first scene I ever did, when I had to walk out of a fake fast-food restaurant called Captain Chicken carrying a big bag of food on top of a bigger bucket of chicken, holding a large drink, all while I’m dressed in a fly costume with wings and a mask I could hardly see out of. Long story short, I ruined the take by dropping the food on the ground and tripping over a step in the middle of the shot.

Another great moment in Mike Crissman history came during the filming of the party scene when I was dressed as the Pig King from the video game “Angry Birds.” After the first couple takes, the makeup department decided I needed a little something extra and emptied five cans of green hairspray on my hair, filling the room we were filming in with nauseous fumes that got the crew, the other extras and probably Chelsea Handler a little high.

It’s moments like these that will come to mind when I see myself, and the many friends I made, on the big screen when the film comes out a year from now. How many cities get to say that?