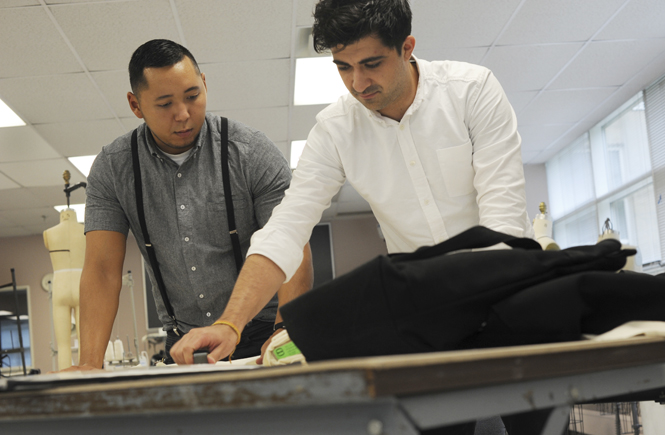 In late October to early November the Fashion School will open its first store in Acorn Alley featuring the designs of fashion students.

J.R. Campbell, head of the Fashion School, said he hopes the store will give the school more of a downtown presence.

The first item sold in the store will be the official Fashion School tote designed by two fashion students, Nick Nero and Aaron Hernandez.

According to Campbell, The Fashion School Store will connect the school to Acorn Alley. Downtown Kent wants the school to put on fashion shows in the city to help evolve the downtown and make the school known.

“The whole premise came about when the College Fashionista rankings came out saying we were third in the country and thirteenth in the world,” said Nick Nero, senior fashion merchandising major. “We were really proud and wanted something students could utilize so we decided on the tote.”

They approached Campbell with their idea and he said he thought it was great for the new store in Acorn Alley. After talking to Campbell, Nero and Hernandez began researching manufacturers where they could outsource their totes.

They ended up going with Z Man, a company in Missouri where they could send their designs to be made into the tote. Nero said the whole process took longer than they expected. When the first sample of the tote came in, changes had to be made before it met their expectations.

The tote comes in two sizes. A smaller one can hold a laptop and a larger on is designed to hold all of the design student’s tools. Nero and Hernandez started carrying the totes around campus and have already started getting a good response.

Pictures of the totes were also posted on Facebook and received good feedback. Nero and Hernandez said students are coming up to them asking when and where they can get their own.

Hernandez is getting ready to launch his own menswear line, with Nero as assistant designer, that he hopes will be sold in The Fashion School Store.

“It has been a great experience,” Hernandez said. “It is exciting to see other students excitement over the totes.”