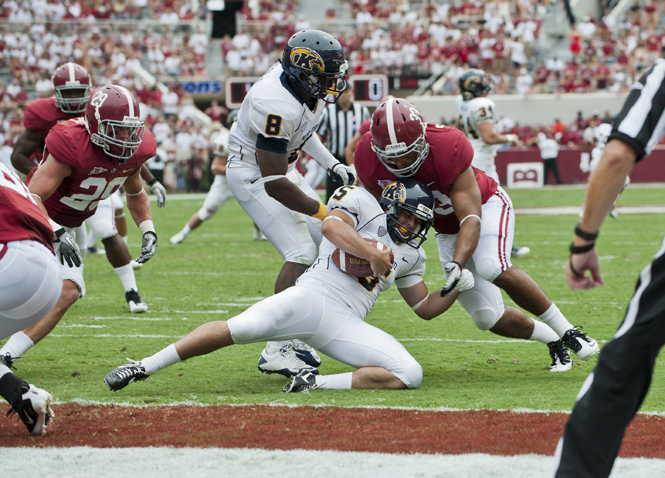 Sophomore Roosevelt Nix gets so much attention at the defensive line position that it is easy to not realize how talented the teammates who line up beside him are.

“I’ve had some very talented individuals, guys who are playing in the NFL right now, but collectively, we’re really good,” George said.

“I say the running backs are deep, but they’re still young and play young,” Hazell said. “All the defensive linemen can play.”

“If you can keep rolling guys in in the first three quarters, the fourth quarter has those better guys in and they’re fresh,” Hazell said. “If the opposing team is playing one offensive line, you naturally have a huge advantage. It creates depth and camaraderie. Guys now prepare harder because they know they may play.”

George said the defensive line is always together, on and off the field. This close bond also translates into their play on the football field.

Stalker said sometimes a player can use hand signals or just a look to let the other players know what he is going to do.

“We know each other and each other’s tendencies,” Stalker said. “You know what the guy next to you is going to do and his strengths.”

Hazell said the linemen are vocal and often tease each other about their respective strengths. For instance, senior nose guard Ishmaa’ily Kitchen is called the screen master.

“He can sniff a screen out before the ball is even snapped,” Hazell laughed. “To hear the other players talk about him like that is kind of funny.”

Stalker and George both said they look at this defensive line and see great possibilities.

“There’s a lot of great guys who can hands down play,” Stalker said. “A lot of guys came in that if I would have that athletic ability when I first came in here as a freshman or sophomore, I would kill for. We have a great season ahead of us as long as we keep working and playing hard as a team.”