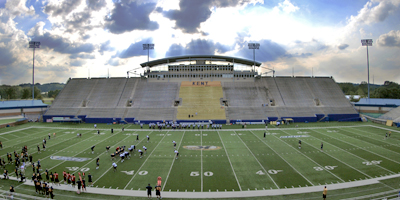 But the athletic department isn’t trying to fill the stadium solely to heed the NCAA warnings. The empty seats at Dix Stadium signify something perhaps just as important to them: missed revenue opportunities from one of the two sports (with men’s basketball) that have a possibility of making money.

The best Kent State has done in recent years is break even, according to data from the U.S. Department of Education. The attendance is consistently among the smallest in the FBS while season ticket prices are the cheapest.

“It’s a very challenging endeavor,” said Tom Kleinlein, deputy director for athletics. “It’s one of the reasons Joel and I came here was we knew we had to make football a goal and make football thrive.”

Kleinlein was hired away from Arizona State last year just as Joel Nielsen was hired. He first met Nielsen in 1993 when he played on the football team at Wake Forest, where Nielsen worked as an associate athletic director.

This year, Nielsen put him in charge of marketing Kent State sports, formally taking over for Pete Mahoney who transferred to the Center for Student Involvement after more than 20 years in the athletic department. The department also made two new hires to further bolster its marketing efforts.

The new-look staff inherits a program that hasn’t had a winning football season during the lifetime of any player currently on the roster.

“Everything revolves around winning or an experience,” said Mike Waddell, an award-winning marketer at Akron and Cincinnati before becoming athletic director at Towson University in 2010. “You can sell tickets to a team that’s not winning, but you have to do that with a really strong grassroots campaign.”

Before the 2010 football season, the “90KSU” marketing campaign was created. The goal was to get a total of 90,000 people at the six home games to reach the necessary 15,000 average attendance required once every two years to stay in the top tier of college football.

“We made our number,” said Kleinlein about the reported average attendance of 16,152 last year. “If we didn’t make our number, we’d be in trouble with the NCAA. That was an interesting thing that Joel and I were faced with the first day we walked on the job here.”

A sub-15,000 season is not uncommon for Kent State. In 2008, during a 4-8 season, the Flashes finished with the lowest attendance of all FBS teams with 10,639. Three years earlier, they averaged 6,658 per game, finishing only above Eastern Michigan.

“They didn’t have the money,” said Waddell about Kent State during his time at Akron from 2000 to 2007. Former athletic director Laing Kennedy “didn’t have that kind of support from (former Kent State president) Carol Cartwright and Lefton; not the way we did in Akron.”

Waddell created the famous “Fear the Roo” marketing campaign in October 2005, which their athletic department called “the single largest marketing effort in the history of the University of Akron.” The campaign “generated more than $130,000 in new revenue,” the university reported in 2006.

Akron was able to more than double the price of season tickets and drew thousands more people to its games. In 2005, the Zips won the MAC championship but drew fewer than 11,000 people for their home games. But during the following four years, the Zips averaged more than 16,000 fans without a winning season.

“We, one year, had over a quarter million dollars for an ad-buy,” said Waddell. “I know for a fact that Kent State never even had half of that. So if I’m outspending them two to one, we built up from a $40 (football) season ticket in my first year there to a $85 season ticket going into my last year. And only in my last year did we really have a winning season. That’s a critical item right there.”

The “Fear the Roo” campaign won the 2005-2006 National Association of Collegiate Marketing Administrators Best of Show award for a “new revenue-generating idea.”

“We did 15,000 students at every home football game so there was a level of student passion that was there, community passion that was there,” he said about differences between the Flashes’ and Sun Devil fan bases; Arizona State had nearly 30,000 loyal fans. “Win, lose, or draw, no matter what, they were always going to be there.”

Although Arizona State was not at risk of dropping below attendance minimums, the challenges are the still the same at Kent State: taking the existing fan base and expanding it.

“One of the things that’s different for us is we ask our coaches to be more external people and go out into the community,” he said about football coach Darrell Hazell and basketball coach Rob Senderoff.

The goal is to increase the program’s visibility even while going through a rebuilding year by interacting with fans, doing radio shows and promotional appearances.

“(If) you do all that when your product is better on the field, it’s going to hit,” said Kleinlein. “That’s what we’re hoping to do.”

He said he’s much more comfortable marketing to the Kent area entering his second year.

“I came into this year with a little bit more understanding,” said Kleinlein, who decided the marketing should be more localized to the smaller surrounding towns, advertising in small, local publications. “You have to appeal to that identity of those people. How do you appeal to those identities? Well, you go into the newspaper that supports that community.”

This summer, Kleinlein set up “Community Caravans,” where Hazell and Senderoff met with people outside of Giant Eagle grocery stores in Stow, Bainbridge, Cuyahoga Falls, and Lakewood.

Getting people to the games

“We’re a leisure entertainment alternative,” said Waddell about promoting college sports. Waddell was profiled in the Washington Times Monday for the drastic attendance increases at Towson football games — six of the school’s top 12 attendances were after he took the job in 2010 .

“You’ve got to engage the students at their level,” he said about how Kent State can market football games. “You’ve got to create a fun environment. Too many colleges are just boring. You have to make a show of it.”

Started by Kleinlein last year, he hopes the “indoor tailgate” will continue to attract families to the game with children’s activities, a sports bar with food and alcohol, a private barbeque area for $20 (including game ticket), performances from the marching band and a pregame address from coach Hazell.

This year, Kleinlein started a tailgate area outside of the stadium with a mechanical bull and DJ just for students.

“One of the things we’re trying to do right now is expose people to the fact that they can come to a division one football game and have five hours of quality family time,” he said. “In theory, you can spend five or six hours and get entertained for less than $50.”

The divide between university and athletic department marketing had always been a crucial flaw at Kent State, Waddell said.

“When Pete Mahoney was there, he tried very hard but he never got any support,” he said, “I don’t know where the institutional support for athletics at Kent State has ever been besides basketball.”

Although the university and athletic department have been traditionally separated, Kleinlein said he is developing relationships with University Communications and Marketing staff to “use some of their abilities to produce stuff and hold down costs.”

Kent State will open next season at home against Waddell’s Towson program, a meeting that he is excited for.

“I’m looking forward to seeing what Joel (Nielsen) has done because he’s a smart guy,” said Waddell about Kent State’s athletic director. “He’s a marketing guy at heart, so I think his talents are in the right place now.”