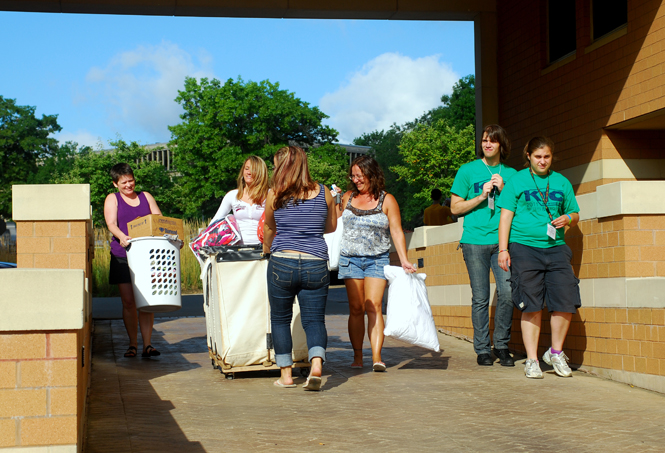 Moving is a group effort for Kent State students moving in on Thursday, Aug. 25. Whether enlisting the assistance from one’s family as Nicole Diederich, freshman exercise science major (2nd from left), did, or getting a hand from the Kent Interhall council’s Movers & Groovers (green shirts, far right), help moving in is never far away. Photo by Sam Verbulecz.

Some students will be living in converted lounges this fall until other arrangements can be made. Residence Services is implementing transitional housing to accommodate the increase in enrollment for the fall semester, which has left several students without standard living arrangements.

“We’re expecting to open (the fall semester) with all our 6,260 beds full,” said Betsy Joseph, director of Residence Services.

Residence Services made offers to cancel housing contracts earlier this month to 140 sophomores close to junior status in order to meet the growing demand for residence hall housing. The offer, which only eight students accepted, gave sophomores near junior status a refund on their $200 housing deposit and a $155 credit to their Bursar account that could be used for a commuter parking pass.

Joseph said she believes most of the students probably chose to keep their contracts because they were satisfied with on-campus living.

“Surveys show that students are having a positive experience here,” Joseph said. “People see the value of living on campus. They were happy and didn’t want to move.”

Due to this increase, about 60 students who completed their housing contract after July will be living in converted cubicles with two to three other students in the lounges of Koonce, Wright, Eastway, Verder, Dunbar, Prentice, Lake and Olson halls on campus.

Students living in transitional housing will be given a 25 percent reduction on their room and board fees, meaning that the converted housing costs about $700 less than a basic double room fee.

Joseph stated that all students living in the residence halls, including those in lounges, are to receive an equal amount of privacy and amenities, including wireless Internet service, cable and individual doors with electronic keys.

Leia Belt, freshman psychology major, was assigned to transitional housing in Eastway for the fall.

“At first I was nervous, but after I saw (my room), I think I got a better deal. It feels like I have a lot of space,” Belt said.

The Residence Services website said it is likely many students currently living in transitional housing will be assigned to a standard room as the semester progresses, but it is also possible that assignments will remain permanent for the entire fall semester.