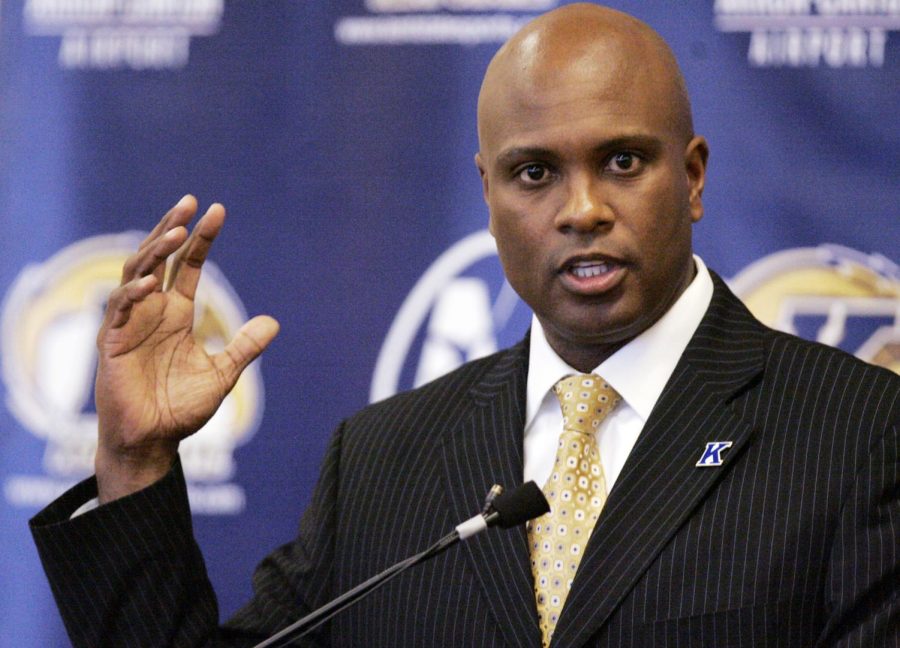 The pouring rain on Monday afternoon marked the beginning of the 2011 football season for Kent State and the first fall practice for new coach Darrell Hazell.

The Flashes hit the Dix Stadium turf to begin their season, just weeks before they face second-ranked Alabama in Tuscaloosa September 3.

For the first two days of camp, the team can’t go all out. NCAA rules require that first practices of the season be completed without pads (except for helmets), forcing the team to run little or no-contact drills.

The Flashes opened with formation walkthroughs for both the offense and defense, and then moved to individual positions drills, followed by non-contact seven-on-seven and full team play.

“We’ll be in helmets tomorrow and shells (helmet and shoulder pads) the following two days,” Hazell said after his first practice, “and we’ll start really banging on Friday and Saturday. Hopefully two weeks from now we’ll know exactly what we have.”

Hazell said he wasn’t satisfied with his team’s first practice.

“You never know what you’re going to get a lot of times on the first day,” said Hazell, who said his team seemed excited, but nervous.

“We put so much information on them today,” Hazell said after practice. “I think they think way too much and it slows them down a bit. The older guys, they should be a little farther along than they are, so hopefully they get that fixed tomorrow.”

Freshman running back Trayion Durham is big. The Flashes top recruit, ranked as the second best fullback in the class of 2011 by rivals.com, showed up to camp weighing 257 pounds on his 6-foot-2-inch frame, Hazell said.

He said Durham’s weight “might be a little bit big for him” and that the Cincinnati native needs to lose about 10 pounds.

Durham rushed for 1,096 yards and 15 touchdowns last year at Colerain High School in Cincinnati, earning him scholarship offers from BCS conference teams like Boston College, Kentucky, Louisville, and Cincinnati. Durham had previously committed to play football at Wisconsin before switching to Kent State in January.

“We think he’s going to be a really good player,” Hazell said. “He showed a couple things in the drills, but not in the team setting today.”

Hazell said Durham still needs to work on pass protection and lowering his pads, but praised his “good feet and good vision”

“Those big backs can hurt you in the fourth quarter,” Hazell said, “in cold weather and bad weather.”

Boden is from Seven Hills and is a 2010 graduate of Normandy High School in Cleveland. He spent last season playing at Lackawanna College, a junior college in Scranton, Pa.

No word on redshirts

Hazell remained tight-lipped about which of the 18 true freshmen on the roster will see the field this year and which others will redshirt.

“Not yet,” he said after being asked if any freshman would definitely have a role this year. “We put a lot of information on them this morning and this afternoon, a lot of different formations and plays on both sides of the ball, so they’re kind of swimming a little bit, but somebody will pop out before you know it.”

Quarterback Giorgio Morgan is enrolled in school but no longer on the team, and linebacker C.J. Steward will be out for the season.

“Giorgio will not be around,” Hazell said about Morgan, who would be entering his redshirt senior season for the Flashes. “It’s just not going to work out for him this year.”

Morgan played in 10 games last season as backup to Spencer Keith, completing 11 of 19 passes for 165 yards, with two touchdowns and two interceptions. The quarterback began his career at Kent State in 2007 when injuries forced him into the starting lineup for two games. He redshirted his sophomore season and lost his starting spot to Keith after an injury in the 2009 season opener.

Steward will remain on the sidelines for the next six months after injuring his pectoral muscle while weightlifting this summer, Hazell said. The redshirt sophomore linebacker was listed as the backup weak-side linebacker in the spring after making four tackles in nine games last season.

With Morgan’s departure, it leaves the Flashes with even more questions about depth at the quarterback position. Other than returning starter Spencer Keith, Sal Battles, a redshirt junior, is the only quarterback on the roster with game action, completing one of four passes in two appearances last year.

Cedric McCloud will likely back up Keith in the fall. The redshirt freshman quarterback was second on the spring depth chart and played the most of any quarterback in the spring game, completing 13 of 24 passes for 129 yards.

The public will be able to see the team practice August 17, when the Flashes hold an open practice from 6 to 7:30 p.m. in Dix Stadium as part of “fan experience night.”