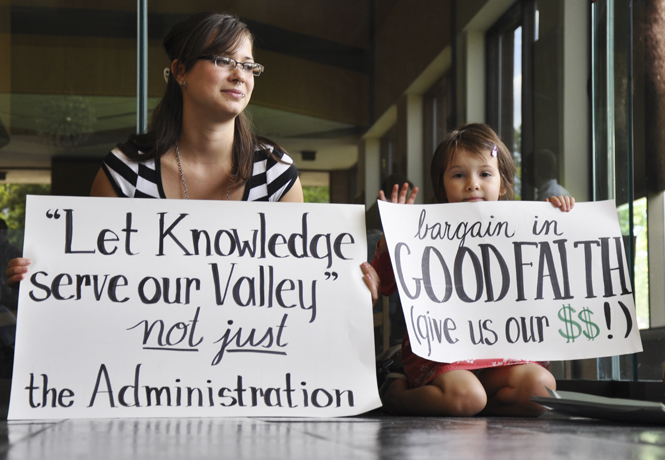 Students at Youngstown State University protested last week against the dispute between their faculty and administration because it delayed the disbursement of their financial aid. Photo courtesy of The Jambar.

The tenure-track contract has 23 articles, but only three deal with money issues like pay and benefits. The remaining 20 articles cover all aspects of faculty life from academic freedom to promotion and course load.

“I think they (students) have an interest in how academic decisions are made,” lead negotiator for the faculty Eric Mintz said. “If you’re talking about how English should be taught, it’s the position of the faculty that the people who teach English are in the best position to make that decision.”

Mintz said the administration has no plans to modify the English department, but his example highlights what he views at the importance of the faculty contract to every day student life.

Mintz said that he could not talk about specifics of the negotiations because one of the ground rules established is that neither side can “negotiate in the media.” However, the Stater has obtained documents concerning the specifics of what is being discussed.

According to the Provost’s Collective Bargaining Updates available online, the university has proposed changes to the article concerning retrenchment. That’s the procedure for closing programs that are no longer profitable. “The current process requires multiple and repetitive levels of review and a time frame upwards of eighteen months,” the web page reads.

A professor who spoke to the Stater on the condition of anonymity said that closing entire academic programs should be a long process. The concern is that the university would close programs in the short term because of current financial fears, and students would suffer in the long term from the loss of important academic courses and professors.

On July 26 the university proposed a new article to be added to the contract which would give the administration the right to remove a faculty member “when he/she is having difficulty performing his/her duties in an effective or safe manner or when he/she is posing a threat to self or others.”

Cornell University professor Alexander Colvin teaches labor relations, and he said in a phone interview the definition of “effective or safe manner” could be open to many interpretations.

The provost’s webpage said that the union submitted a counter proposal on Aug. 4, which made “significant revisions.” Some of these revisions include definitions for what constitutes fitness for duty, and what types of actions would be taken if such cases arise.

After the last meeting on Aug. 23, the provost’s webpage update said the university is hopeful that they could reach an agreement with the union over faculty fitness for duty. It states that both sides are in agreement that non-disciplinary action is needed for such cases. Mintz said that in negotiations both sides start on opposite ends of the spectrum with their own proposals, and the goal is to hopefully meet in the middle.

The administration submitted another proposal on Aug. 15 that would change how professors are paid for teaching summer classes.

“Summer assignments would be compensated at a flat rate, regardless of rank and/or discipline,” according to the provost’s update.

The Kent State professor said the problem is that this represents a substantial pay cut for senior faculty. Currently professors earn 10 percent of their salary per summer class, and a flat rate could reduce interest for highly qualified professors to teach classes during summer sessions.

Colvin said some of the issues that draw the most controversy are usually benefits and pay. Mintz said the negotiations with Kent State are not at the point where they are talking about money. He said those topics are usually saved for the end of negotiations.