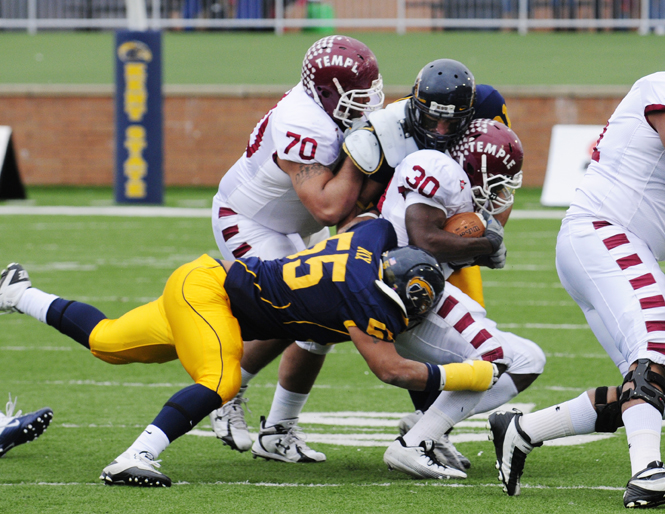 Roosevelt Nix is a quiet, soft-spoken 19-year-old sophomore defensive tackle. At just under 6 feet tall and 240 pounds, he is the smallest lineman on the team.

But unlike the start of his true freshman season, when few could have predicted his success, Nix won’t sneak by opponent scouting reports any more.

He enters this season as the reigning Mid-American Conference defensive player of the year — leading the conference in tackles for loss (20) and sacks (10) — and one of 65 players on the Bednarik Award (given to the best defensive player at the end of the season) watch list.

“Just the fact that I’m known makes me work a little harder,” Nix said in late July about entering this season with high expectations.

“We’re trying to get to this MAC championship. That’s the only expectation I have this year,” he said during the first week of practices. “Individual accolades, if they come, they come, and if they don’t, they don’t.”

With veterans Ishmaa’ily Kitchen, Dana Brown Jr., Lee Stalker and Jake Dooley returning to the defensive line, analyst Phil Steele ranks the unit as the best in the conference. As one of the top returning players for the Flashes, his teammates and coaches are looking to Nix to be a more vocal leader.

Nix was one of five true freshman to earn varsity letters last season. For the rest of his class, this fall is the first chance for them to see the field.

“Leadership skills” is the one thing Nix said he wanted to improve from last year. “I’m not a freshman anymore so I want to take some of the freshmen under my wing and teach them some things that I was taught from the guys last year and just keep the cycle going.”

“Last year I think he was trying to get the feel for it,” Brown said. “But now he’s more vocal than ever. He’s a senior in a sophomore’s body — he doesn’t act like a sophomore. Even seniors respect him as a vocal leader on and off the field.”

New defensive line coach Brian George understands that Nix is a man of few words. He expects him to lead by example while becoming more of a vocal leader.

“We have to realize, number one, is that he’s only a second year player,“ George said. “A lot of guys redshirted in his class last year. None of those guys are asking to be leaders on our team. He’s stepped to the forefront as a player, so we’ve expected some leadership out of him.”

Check out previews of Nix and the other Golden Flashes here.