Dormitory detente: Roommate conflicts are a growing part of the college experience 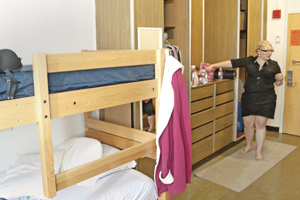 KRISTEN SALEM I DAILY KENT STATER Tri Towers, one of the residence halls on the Kent campus, will offer dorm space to hundreds of incoming students this semester.

SEATTLE _ Sharing a 115-square-foot dorm room with a stranger has always required some adjustment. (For reference, the master bathrooms of some homes now measure 180 square feet.)

But experts say this year’s incoming college class and the rest of the millennial generation are ill-equipped for the compromises and negotiations required for living in such close quarters, with increasing numbers turning to their parents for solutions.

“We get parents calling and demanding that they want their kid out of a room immediately, but there’s been no conversation between roommates,” said Chris Jaehne, administrator for residential life at the University of Washington.

With many universities at capacity, many report that students can’t fall back on requesting a single room or moving without first arranging a swap.

About the third week of school, parents can expect a call or e-mail. “That’s when the conflicts heat up,” said Susan Fee, author of “My Roommate Is Driving Me Crazy!: Solve Conflicts, Set Boundaries and Survive the College Roommate from Hell” (Adams Media, 2005). “What seemed cool is now really annoying.”

Roommate troubles aren’t limited to freshmen; in fact, sometimes there are more problems with sophomores, who often choose to room with a friend, said Romando Nash, director for residential learning communities at Seattle University. Underclassmen there are required to live on campus.

In a new, often high-pressured environment, many students see the privacy of their room as a haven. It can be a shock to discover they can’t, say, study in their own room (their roommate is enjoying downtime watching TV) or sleep in peace (roommate’s boyfriend or girlfriend is always over).

Possible consequences of roommate conflict include increased stress, a drop in grades, forking out for a move or even dropping out of school entirely.

“If the living environment is disruptive, then students can have difficulty concentrating and studying,” Jaehne said. “And that’s what they’re really here for.”

Smaller families, less sharing. At the end of their child-bearing years, a fifth of moms reported having only one child in 2002, more than double the percentage in 1982, according to the U.S. Census Bureau. More than four out of 10 moms had two kids in 2002. With increasingly large houses, few siblings have to share rooms or even bathrooms, experts say.

I’ll just IM you. Instead of face-to-face conversations, roommates rely on instant- and text-messaging or e-mails to vent frustrations – sometimes when they’re both in the same room. Without the aid of body language, this can lead to additional miscommunication.

Helicopter parents. So-called because they hover, helicopter parents try to save kids from unhappiness and frustration by swooping in to protect them and solve problems. As a result, some say, many teens today lack the ability to deal with challenges or resolve conflict. With parents who can’t say no, overindulged kids end up with “unreasonable expectations about having things their way,” Fee said.

I’ll take care of it. At one time, universities acted in loco parentis (in place of parents) but stepped back in the `60s and `70s to treat students more as adults. Now it’s not colleges in loco parentis, but it’s parents themselves who won’t relinquish control. Too often, officials say, parents listen to the one-sided criticisms and become phone-line rescuers.

“We’ve seen an increase in phone calls from parents,” Jaehne said. And not just to him, but to the president or provost’s offices, demanding moves or single rooms (nonexistent for freshmen). “Parents are more involved in their kids’ lives growing up now, and that isn’t changing when students leave for college. They’re still very involved. It’s becoming more and more of a challenge for us.”

University staff seek a balance between treating residential life as a developmental stage for students and catering to parents as paying customers. Slightly more than half of the approximately 4,750 freshmen will live on campus in the UW’s seven residence halls.

“No matter who your roommate is, it’s one of the best learning and growing experiences in college,” said Sean Whiting, resident director of the UW’s McCarthy Hall. “You learn a lot about yourself in how you interact with your roommate or how you avoid it.”

Encouraging students to work things out, rather than move out, “teaches life skills and what it’s like to be adults,” Nash said.

“These people are going to be their boss one day,” agreed Fee, a counselor. “You can’t choose who you sit next to in your cubicle.”

The university will help students if there are irreconcilable differences, such as a smoker who signed up for a nonsmoking room or a studious roommate with a party-type.

Most of the time, though, venting is all students need.

Overnight guests/sex in the room. “Either you walk in on them or they assume you’re asleep,” said Susan Fee, author of “My Roommate Is Driving Me Crazy!: Solve Conflicts, Set Boundaries and Survive the College Roommate from Hell.” “People don’t know what to say.” The University of Washington’s policy, for example, restricts overnight guests to no more than seven times in a given year and no more than three consecutive nights. But it’s difficult to enforce unless a roommate complains.

Unasked “borrowing” (clothes, food, toiletries). “A roommate will come back and notice her clothes smell smoky. Or friends will come over and eat a roommate’s food,” Fee said.

Friends over all the time.

“My parents acted as an outlet for me,” said Emily Mackelprang, a UW junior and resident adviser who said she would have been mortified if her parents had intervened on her behalf. “I let out all my frustration at them and that’s all I needed to do.

“They empathized but they didn’t get all fired up about it,” she said. “They encouraged me to take responsibility for things.”

“When you get to college, there’s this sense of freedom that your parents are not here to baby-sit so you can do what you want,” said Josh Leavitt, who graduated from Washington State University in 2003. “Pretty soon you realize, ‘Oh, there are other people around me. I’ve got to cater to their needs and expectations as well.’ You learn early on to let things roll off you.”

By next fall, the UW hopes to have an online process in which students can select their own roommates by filling out detailed questionnaires. Currently, the UW has more than 100 people on its autumn waiting list for residential-hall rooms, so any changes will have to be swaps, Jaehne said.

Seattle University asks students to choose from one of 18 academic-themed communities, then matches specific roommates based on answers to an online preference sheet, Nash said.

Roommate pairing can be a little like dating online: What sounds good on paper doesn’t always pan out, Fee said. Roommates who live with best friends also need to be wary.

Darren Olson, a University of Washington senior and a resident adviser, admits to passive-aggressive tactics when he roomed with his best friend from high school their freshman year. If his roommate was watching TV while he was studying, Olson would wait until his friend went to the bathroom, then turn it off. Or he’d disable the music function on his roommate’s laptop. “Then he couldn’t get it to work when he’d come back,” Olson said, conceding that it doesn’t sound so mature now. “It didn’t really help the situation.” (They’re still good friends.)

At many schools, roommates sign an agreement that spells out everything from how often should the room be cleaned to keeping the room warm or cool to how much notice is needed before a guest stays overnight.

While it’s important for roommates to consider such issues, students usually sign the documents during the early honeymoon period when they don’t think they’ll have any issues, Fee said. “It’s, ‘Yeah, whatever, I’ll sign it because I have to.’ Then when the problems come out, no one takes (the agreement) seriously.”

Keeping an easygoing attitude helps. Mackelprang learned to cat-nap through TV and music and even studied in her closet with the light on after her freshman roommate when to bed. “We both tried to be courteous,” she said. “You don’t get to have everything your way. You have to give a little bit.”

For all the potential problems, when roommates do click, they can end up as good friends. WSU grad Leavitt got burned by one roommate who didn’t pay bills, but also lived with a group of friends who would buy food together at Costco and leave cooked meals in the oven if someone had a late class.

“You just have to find out where you fit in and have fun,” he said.

Overnight guests/sex in the room. “Either you walk in on them or they assume you’re asleep,” said Susan Fee, author of “My Roommate Is Driving Me Crazy!: Solve Conflicts, Set Boundaries and Survive the College Roommate from Hell.” “People don’t know what to say.” The University of Washington’s policy, for example, restricts overnight guests to no more than seven times in a given year and no more than three consecutive nights.

But it’s difficult to enforce unless a roommate complains.

Unasked “borrowing” (clothes, food, toiletries). “A roommate will come back and notice her clothes smell smoky. Or friends will come over and eat a roommate’s food,” Fee said.

Friends over all the time.