To avoid dorm overflow, some sophomores eligible to live off campus 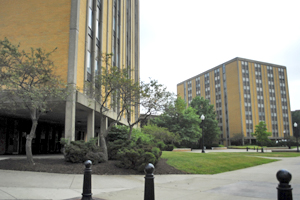 KRISTEN SALEM I SUMMER KENT STATERTri-towers is one choice of residency for students, whether they be incoming freshman or seniors. Due to the capacity of these residence halls, space is running low and upperclassmen are encouraged to find residency off campus.

Students who are just below junior status have the chance to be released from their residence hall contract before the beginning of fall semester — and receive money for it.

Betsy Joseph, director of Residence Services, said offering to release students from their contracts is one way the department is trying to accommodate “the largest freshmen class ever.”

“‘It’s a good problem’ is the easiest way to say it, but our occupancy is entirely enrollment-driven,” Joseph said.

In prior years, Residence Services has offered exceptions to the university’s housing policy, which mandates that all students must live in residence halls if they have completed fewer than 60 credit hours, do not already reside within 50 miles of campus, have lived on campus for less than four semesters and are below the age of 21.

However, new to this year’s offer is a $155 incentive for students with 45 to 59 credit hours to end their contract early and move off campus.

“We will then cancel your contract, refund your housing prepayment and apply the additional $155 credit to your (Bursar’s) account,” part of the email read.

The offer extends beyond those 140 students, Joseph said. Any student who has a housing contract and is no more than 15 credits below junior status can take part in the offer by contacting Residence Services by Aug. 1.

“It’s a change in plan in the last minute,” Joseph said. “They have things they need to do in order to secure off-campus housing… We want to recognize that they’ve done something that was going to help us meet our desire to house freshmen.”

By the middle of July, however, prime time to lease off-campus living space has passed.

Most of the big student-housing leasers won’t have available space until weeks into fall semester or by January. College Towers, Whitehall Townhomes, Ryan Place, Jordan Court, Indian Valley, Huntington Hills, Holly Park, Eagles Landing and University Inn are either full or have a waiting list.

“It depends on the floor plan,” Tahyi said. “We don’t have tons of room.”

For the past two years, the student population at Kent State’s main campus has spiked, jumping by more than 1,200 students between Fall 2008 and Fall 2010.

The added beds accommodated the larger freshmen class, unlike the year before, when the student population spike forced some students into “transitional space,” either in a lounge room, or a resident assistant’s room until a space opened elsewhere.

Residence Services has projected that because of the expected population spike, some students will be moving into “transitional space” in August, Joseph said.

“I don’t have any more space to make triples; I don’t have a building that’s all singles that I can make to doubles,” Joseph said. “That isn’t available.”

Another way Residence Services is trying to buffer the projected enrollment spike this year is to deny anyone 21 or older from applying to live on campus in the fall.

She added that students who renewed their contract during spring semester will still live on campus, despite their age.

Joseph said her department has encouraged student attendees of Destination Kent State who live within 50 miles of campus to consider commuting from home for fall semester and reapply for on-campus housing for Spring 2012.

“Anyone who applies for housing now is going to be in transitional space,” Joseph said.