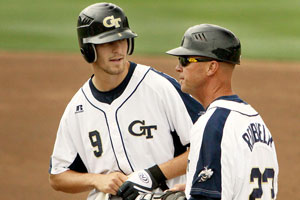 Courtesy Georgia Institute of Technology Rick Rembielak, the former head coach of Kent State University's baseball program, is seen on the field while coaching for Georgia Tech in 2011.

Rick Rembielak, who won more games than any other baseball coach at Kent State, is back in the MAC after six seasons – but not with the Flashes.

Rembielak will coach just 15 miles from where he spent the first 17 years of his coaching career after the University of Akron tapped the 50-year-old to fill its head baseball coaching vacancy earlier this month.

“I think it’s awesome; there’s no other word,” Rembielak said. “It’s coming back home to a familiar place where I had good success, great experiences. Coming back to not only the MAC but northeast Ohio puts the icing on the cake for me.”

Rembielak joined the Kent State baseball staff as an assistant coach under Danny Hall in 1988. Six years later he replaced Hall, who left for Georgia Tech, and Rembielak became the school’s winningest coach after raking up 373 wins during the next 11 seasons and earning MAC Coach of the Year honors in 1996, 2000 and 2003. His teams won four regular season conference titles and three conference tournaments.

“It seems like a really good hire,” Webb said. “He knows what it takes to win here in the MAC. As far as I can tell, they do invest in the program; it’s just a matter of getting the right guy.”

COACHING IN THE ACC

In 2004, Rembielak was a hot commodity, and Wake Forest came calling. He jumped at the offer and signed a five-year contract.

“It was a no-brainer,” he said about leaving the Flashes after 17 years. “After all these years in northeast Ohio at a mid-major, it just made sense to me.”

Unlike Hall, who went on to make the Georgia Tech a consistent national power, Rembielak didn’t have the same success after Kent State. In his five years at Wake Forest, he had a .500 record, going 25-31 and 22-30 in his last two years. The university let him go after the 2009 season.

Webb said Rembielak’s problems in the ACC were because of the nearby schools.

“You look at where he was, you have N.C. State and North Carolina; that’s some pretty tough competition there,” Webb said. “When you’re at Wake, you’re not getting the premier recruits in the area.”

Division I baseball programs by NCAA rule may only give out the equivalent of 11.7 full athletic scholarships, meaning that players at Wake Forest, a private university, generally has more out-of-pocket expenses than its competition at public universities.

After being out of coaching for a year, Hall asked Rembielak to join his staff for the 2011 season. He accepted it and said it helped revive his coaching career.

“I was doing what a 23-year-old would be doing, but that was really what I needed to get back active (in coaching),” he said.

Akron baseball coach Pat Bangston left in May after a 16-37 record that season. It was just the opportunity Rembielak was looking for, and sought the job as soon as he learned of the opening.

“Right away I had my résumé and cover letter, sent it out to the athletic director, and it kind of hit the right people from there,” he said.

He said he thinks this transition will be smoother than his last head coaching job.

“It’s a lot easier doing this than when I went to Wake,” he said. “I didn’t know the area or any of the high schools and summer coaches. Up here there are a lot of people [I know] that are still in the game.”

The battle between Akron and Kent State for top prospects in the area will be intriguing to watch, Webb said.

“[Kent State coach Scott Stricklin] has had so much of an imprint on the recruiting base here in Ohio,” he said. “Recruiting is ultimately going to take Akron out of the cellar.”

When the Flashes and Zips face each other for the first time next spring, Rembielak said he doesn’t expect to have any “exciting and strange” feelings about facing his former team.

“I did that already,” he said. The Flashes opened the 2011 season against his Georgia Tech team.

“That’s all behind us,” he said. “I don’t think it’s going to be anything out of the ordinary.”