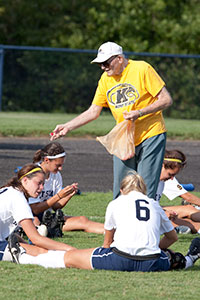 Most people at Kent State probably had no idea who Tom Kot was. Those who did probably didn’t know his name was Tom Kot.

Kot, known affectionately as “The Candy Man,” died Friday at the age of 92, leaving the Kent State athletic community without one of their staple fans at home games.

Kent State athletes and coaches knew Candy Man as the proud alumnus who would pass out bright red gumballs to players after home games.

As a former field hockey player, I remember the days Candy Man showed up to cheer us on.

I don’t remember which team we played or what the score was, only that we lost.

My teammates and I all sat in a circle on Murphy-Mellis Field immediately after the game, stretching while my coaches talked privately by the press box.

I looked around the circle of angry, upset faces and made a sad attempt at loosening my quad muscle. I knew it would be a long walk to the locker room just by the expressions of disappointment and disgust.

But, then, behind me I heard the rustle of a plastic bag.

Out of the corner of my eye, I could see Candy Man, holding his sack of red gum balls, walking toward us with a thoughtful smile on his face. He either couldn’t sense the tension or decided to disregard it (I think it was the latter).

– He graduated from Kent State in 1948, where he played two years of football, two years of baseball and met his wife Doris.

– As a 28-year-old football player and a 29-year-old baseball player, Kot was and continues to be one of the oldest KSU students to ever play for a Kent State sports team.

– He was a member of the Blue and Gold Club.

– As an original member of the Rough on Refs Club founded in 2001, he and his fellow members were named Varsity “K” Persons of the Year in 2009.

– He was named one of the Grand Marshals for the 2010 Kent State Homecoming Parade.

He simply walked right into the circle and started passing out gumballs. With each gingerly distributed treat he’d say, “You’ll get ‘em next time” or “Come on, smile.”

As his journey around the circle continued, I could see the expressions of my teammates soften. We may have been angry about the game, but we simply could not be angry around Candy Man.

Soon after everyone got a gumball, he made us gather tight for a group photo — I’m pretty sure he made our coaches get in on the action in spite of the intensity of their discussion. As always, he situated himself directly in the middle and put each of his arms around the two closest players, all the while saying what a lucky guy he was.

We smiled and hugged him and thanked him for coming. For a moment we were able to forget about the loss.

It never mattered if we won or got slaughtered; Candy Man was always there to support us and give us the little, red Brach’s Abra CaBubbles that started out tasting like cherry Jell-O and then transitioned to classic bubblegum flavor.

Monday evening, I drove to Hopkins Lawver Funeral Home in Mogadore to pay my respects to the family of the man who managed to make my team smile in the face of defeat.

There, at the front of the parlor, surrounded by photos of Kot, sat a big blue bowl filled with Abra CaBubbles. I got a couple looks as I let out a soft laugh — what a perfect goodbye the bowl of red gumballs seemed.

After exiting the funeral home, I unwrapped the bright red candy and placed it in my mouth. I recognized the unmistakable taste of cherry Jell-O and smiled at the memory of him.

Kot may very well have left Brach’s executives scratching their heads at the dramatic plummet in Abra CaBubble sales. But he’s also left behind a family of current and retired Kent State athletes, including me, who will never forget him.

Julie Sickel is the editor for the Summer Kent Stater.